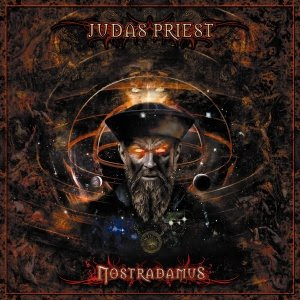 When metal bands do concept records based on historical figures or writings, it's an iffy proposition. For every superb album like Bruce Dickinson's "The Chemical Wedding," you get a whole bunch of losers. Having listened to the first single off Judas Priest's upcoming concept record "Nostradamus," which seems like a bit of a hokey concept to begin with, I'm not sure what we're going to get when it hits shelves in June.

The operatic opening, I felt, was a little weird. The keyboards were kind of cheesy, and the vocals don't really play to Rob Halford's strengths. After that, we get a pretty standard Priest number that sounds a bit like a mash-up of a couple of "Painkiller" tunes. The song has its up and downs. "Painkiller" is one of my favorite Priest records, so I don't have any problems with that sound, but at the same time, much of the song feels like I've heard it before. The chorus is one of the weakest points (aside from the repetitive chant of "Nostradamus"), and a little goofy-sounding. There's a line that I believe is "Nostradamus ... he's our mage." On casual listen, it comes off sounding like "Nostradamus ... he's our man," which would be worse than some of the lyrics they forced "Ripper" Owens to sing on "Demolition." They pick it back up with a nice ripping bit going into the solo with Rob screaming over it, that I really like. (Editor's note: It has been pointed out to me by a reader that these ears that have been abused at metal concerts for a quarter of a century have completely misheard this lyric. The poster points out the actual lyric is "Nostradamus is avenged." I don't think the lyric is quite as clear as he seems to think, but I concede that it is probably correct and it is a much better lyric.)

Ultimately, it sounds like a pretty average Judas Priest song. Nothing truly disappointing, but nothing really inspired either. Naturally, I'll reserve judgment until I hear the whole record, but I hope that this isn't the best song it has to offer. Nice cover, though.

You can make your own conclusions about the song since Epic Records is offering it as a free download here. Give it a listen.
Posted by Fred Phillips at 12:23 AM