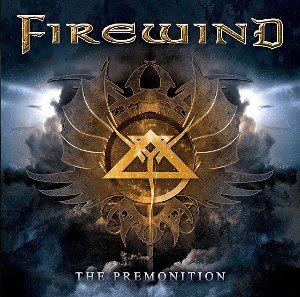 Despite a rotating cast of musicians, no one in the melodic/power metal realms has produced more consistent records over the past several years than Firewind. Their latest record, The Premonition, is the second record for Century Media and the second with the same lineup, a first in the band’s history. While it doesn’t bring any major shifts in direction, it does find the band beginning to mesh better.

The record opens with a bang on the thrasher “Into the Fire.” This track features an obvious homage to classic Metallica. In its opening, you’ll hear elements of “Battery,” “Sanitarium,” “Blackened” and a few others leading into some fast-paced riffing that finally settles more into power metal territory when Apollo Papathanasio begins singing. It’s not the rip-off of Metallica that a few other bands are pushing these days, and perhaps it’s not exactly a straightforward tribute, but it’s certainly a tip of the hat to the influence, and it’s a welcome beginning to a welcome CD.

The Premonition has a nice variety about it. The songs range from pounding power metal numbers to more commercial pieces, like the first single “Mercenary Man,” where the band brings some 1980s arena rock influence. That track also features one of the most memorable hooks to be found here. It’s really a tune to get out on the highway and crank as loud as it will go with that soaring opening and chorus, just set the cruise control if you don’t want it to be an expensive trip. The record keeps going strong with the slashing riffs of “Angels Forgive Me” and a return to the thrash touches that opened the record on “Remembered.” The Police-inspired clean opening of “My Loneliness,” which finds Papathanasio doing his best early Sting, is cool. I was impressed by the choice not to include a ballad on their last record Allegiance, but for the most part I like this one. The verses are cool, but the chorus is not quite as catchy, sounding a bit like a Scorpions throw-away.

There are some rough moments later in the record that make it not quite as enjoyable as Allegiance. After a nice traditional metal opening riff, “Circle of Life” loses its steam and becomes perhaps the most lifeless offering of the 10 tracks here. And I’m not sure what they were thinking when they decided to cover Michael Sembello’s “Maniac.” Yeah, the song from “Flashdance.” They crunch it up enough to make it listenable, but it’s still a real head-scratcher for me. The only thing I can figure is that keyboard player Bob Katsionis really wanted to do the synth line that opens the song and somehow convinced the rest of the band to do it.

Fortunately, they make a comeback after that to close the album strong with “Life Foreclosed.” The song is perhaps the darkest moment on the record, and despite some small lyrical challenges in the chorus, it’s still one of the best numbers here.

With The Premonition, Firewind delivers exactly what I’ve come to expect from them, a set of tasteful, melodic and catchy songs that are well-played and well-produced. Founder and guitarist Gus G. has quickly become one of my favorite players in the current crop, and his chops continue to impress here. While I occasionally think Papathanasio needs a little more grit in his voice, it’s hard to argue with the power he puts into moments like the chorus of “Mercenary Man.” You’d be hard-pressed to find a better band in the current crop of power/melodic metallers than Firewind. While The Premonition doesn’t top 2006’s Allegiance, which stands as Firewind’s best work to date, it’s still a very solid, consistent album and one worth your consideration.

Posted by Fred Phillips at 6:11 PM