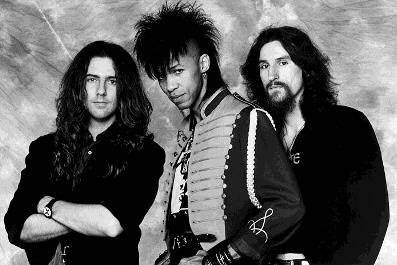 These days it's a rare thing to find a record that really blows you away, that makes you go "wow, I've never heard anything quite like that before." I've experienced a lot of music in my life, and I guess, to an extent, I've grown into the jaded old cynic that always feels like most new stuff is just a rehash of something older with a few new touches. So it's nice to revisit a time when I had a little fresher view of music, and I could be surprised. When the promo for the latest from King's X, "XV," arrived in my mailbox earlier this week, it made me think about how I discovered the band that was one of my favorites through the late 1980s and early 1990s.

I was in high school when I first heard King's X. I was sitting in front of the TV one Saturday night watching "Headbanger's Ball," a weekly ritual for me in those days. The first thing that stuck out to me was the striking appearance of singer/bassist Doug Pinnick. Here was this tall, lanky, mohawked black guy (which was a rarity in itself in hard rock and metal in those days) that served a sharp contrast to the makeup-coated, big-haired (although his certainly wasn't small), preening singers of the time. The physical differences, though, melted away when he opened his mouth and that soulful, monster of a voice came out. I wondered how something that big and resonant could come out of this skinny guy that looked like he weighed 120 pounds soaking wet. What he sang, I believed. The voice had that kind of power.

But it wasn't just Pinnick and his voice that drew me to the song. It was the whole mish-mash of musical vibes that were going on. It started with that big power chord riff. It was a simple three-chord riff, as many of the best are. The riff is a play straight out of the Black Sabbath playbook, but with a twist. Instead of doomy and gloomy as Tony Iommi would have delivered it, it was faster, joyful and uplifting. Built around that metallic riff was a range of influence from funk, soul and even gospel. And then there was Pinnick's manic, yet powerful vocals, that brought it all home, brothers and sisters. I was instantly hooked.

I picked up my copy of "Gretchen Goes to Nebraska" on my next trip to the record store, and found even more to like about the King's X sound. It truly was like nothing I'd ever heard -- tight Beatles-style harmonies and song structures that ran head-on into Sabbath-influenced riffs, thumping and funky bass lines scattered throughout, old school soul flourishes here and there, all delivered with the power and passion of a gospel choir. For all that, they still managed to keep a sardonic sense of humor in the music, too.

The band rapidly became a favorite of mine. I quickly picked up their previous record, "Out of the Silent Planet," and snapped up each following record through 1994's "Dogman." Admittedly, King's X's late 1990s records and those earlier this decade were spotty as they began to experiment and move away from that powerhouse sound that first made me a fan. The good news is they've come full-circle back to that sound on their new one. Look for my review of it in the coming weeks.

Hear a clip of "Over My Head."

Get "Gretchen Goes to Nebraska."

Posted by Fred Phillips at 7:45 PM