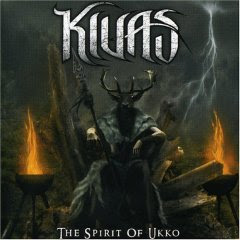 In preparing to review Kiuas' latest record, "The New Dark Age," I revisited the album that first got me hooked on the band. Listening to it again and re-reading my review, I still stand by every word. If you haven't heard Kiuas, you owe it to yourself to check them out. Look for my review of their latest coming soon, but for now, enjoy a blast from the past:

It’s rare for an album to catch my ear on first listen. Usually I have to hear it three or four times before I can really form an opinion on it. But sometimes an album hits me like the bolt of lightning crackling from the sky on this album cover. If you’re a power metal fan, go get this album now. It’s that good.

Though Kiuas has been around since 2000 and recorded a number of EPs, this is their first full-length album – well, at eight songs and 42 minutes, it’s more like an extended EP by today’s standards. That’s a problem, since I wanted this album to keep going. At first listen, I thought this was a power metal outfit with a death metal fetish, as the title track breaks out in blast beats and some melodic death riffing. That in itself was interesting to me. Singer Ilja Jalkanen sounded a bit like Zachary Stevens with a heavy accent on the track – another point in the album’s favor in this Savatage fan’s estimation.

But that was just the beginning. Through the course of the album, the music takes sidetrips into medieval sounds, Viking metal, neoclassical and a few other styles. It’s all tied together with an old-fashioned hard rock sensibility, due in large part to Jalkanen’s delivery. That old school feel is particularly evident on “No More Sleep for Me” and “Warrior Soul.” Whereas most power metal bands feel the need to have a singer with a “pretty” voice, Jalkanen puts a little more grit and power into his vocals. He can pull off the traditional high-pitched harmonies, but he can also snarl and scream when the music calls for it. He claims bluesmen Buddy Guy and Howlin’ Wolf among his influences, which seems a bit odd for a guy from Finland, but you can hear a bit of that blues tone in his voice and it puts him miles beyond the same-sounding vocalists that dominate the genre. It proves that you can sound like a man and still be a great power metal vocalist.

There’s a great deal of Manowar influence on the album, particularly on songs like “On Winds of Death We Ride” and “Warrior Soul.” If you’re not into the warrior metal schtick, don’t worry, it’s not quite as over-the-top as some of the acts out there. Besides this album is so musically solid, they could be singing “Jesus Loves Me,” and it would sound cool. In fact, the only weak song on the album is the semi-ballad, “Thorns of a Black Rose,” and even it’s not a bad song. Mikko Salovaara lays down some gorgeous acoustic guitar work on the soft parts that raises it above the melodrama of the rest. I was also impressed with Atte Tanskanen’s key work. It adds a great deal of atmosphere to the songs, but it doesn’t stick out, even when it plays a primary role in the song. That seems obvious, but if you’ve listened to a lot of power metal, you’ll know that not every keyboard player gets it.

Kiuas pulls out a new surprise on almost every track, adding a variety of elements to their music without ever sacrificing their identity. Whether it’s the Malmsteen-like sweep arpeggios of “Warrior Soul” or the chugging Meshuggah-style riffs on “And the North Star Cried,” it’s obvious that Kiuas knows what their strengths are as a band and they use their influences well to accentuate those.

This is how power metal should be done, and if Kiuas doesn’t quickly rise to the top ranks of the genre, something is seriously out of whack.

Get "The Spirit of Ukko."

Still Spinning is an occasional feature about an older record that still gets regular time in my CD player.
Posted by Fred Phillips at 11:51 PM