Review: Black Tide, "Light from Above" 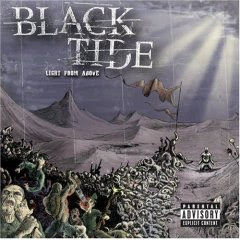 I was intrigued when I heard the opening single “Shockwave” from Black Tide’s debut record. Sure, the lyrics were a little corny, but it was hard to get the chorus out of my head anyway. So, I’m torn when listening to the full record. On the one hand, after years of tuneless screaming from new bands, it’s really nice to see some young guys returning to the melody and distinctive vocals that are the roots of metal. On the other hand, there are points on this record, where I just don’t quite buy it.

If you haven’t heard Black Tide yet, they play a retro brand of metal, reminiscent of the early 1980s sound coming out of England. And while a song like “Shockwave” has a hook that will bury itself in your brain, it’s a little more difficult to take them seriously on a song like “Warriors of Time.” Despite a nice classical-flavored clean guitar opening, the “ohohoohs” and the lyrics are just way too hokey. It’s very, very Spinal Tap.

Black Tide are at their best when they’re ripping away, like on the opening riff of “Let Me,” a song that strays a bit toward the later 1980s hard rock scene, but is still quite enjoyable. The same can be said of “Show Me the Way.” When they try to slow it down a little as on “Give Me a Chance,” it’s often just boring.

There’s plenty of hat-tipping to the NWOBHM scene here, like the opening of “Enterprise,” which will put listeners in mind of Priest’s classic “Electric Eye.” While offering a wink and nod to your influences is cool, the biggest misstep on this record is the decision to cover Metallica’s “Hit the Lights.” It’s a lightweight cover that’s like a thin, faded copy of the original. Black Tide plays the song almost note for note like the original, but it just doesn’t have the explosive power that Metallica gave it. Gabriel Garcia’s voice is just too thin and the addition of some squealing guitar notes on the main riff aren’t enough to keep you from wishing you were listening to the real song. Fortunately, they recover with the next song, “Black Abyss,” which opens with a great riff and gets them back to that British vibe that has served them well earlier in the record, and they finish strong on the remaining songs.

There’s no doubt that guitarists Garcia and Alex Nunez have the chops down. The guitar work here, for the most part, will transport you back to the glory days of the NWOBHM. Garcia’s vocals are solid, if not stunning, and the record sounds really good. But when songs like “Warriors of Time” and “Live Fast, Die Young” come on, I just can’t seem to shake the feeling that I’m listening to a bunch of kids copping licks off of records they found in their parents’ basements.

Maybe my reluctance to embrace Black Tide is just me, having grown up in the original era of this style, being the grouchy old fart yelling out the window for these kids to get off my damn lawn. I’ll admit to that. Certainly there are quite a few enjoyable songs on "Light From Above," and the record has grown on me more each time I listen to it. It will be interesting to see if this record, which has gotten some traction since the release of “Shockwave,” might help usher the sound back to the spotlight and help bring the melody and vocals back to the up-and-coming scene. One can only hope.

Get "Light From Above."

Posted by Fred Phillips at 7:58 PM