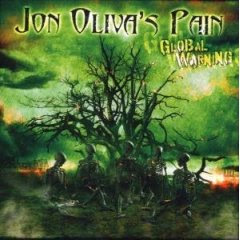 With Savatage seemingly on indefinite hiatus between the monster that Trans-Siberian Orchestra has become and the various solo projects of its members, fans are getting a lot of music in a similar style, but not what they really want. Until now.

The first two efforts of Jon Oliva’s Pain have been quite enjoyable, if a bit uneven. "'Tage Mahal" (2005) represented a welcome return to the older, more aggressive style of Savatage, but at the same time, the songs on the record sounded an awful lot like Savatage throw-aways. The follow-up, "Maniacal Renderings" (2006), had one of the best songs Oliva has recorded in years, “Through the Eyes of the King,” but much of the record was very personal and self-indulgent. The same could be said of Oliva’s latest, "Global Warning," with one big caveat. Indeed, this record is very indulgent. Unlike "Maniacal Renderings," however, "Global Warning" is pure fucking genius.

You know you’re in for a wild ride from the title track, which opens the record. Oliva has, for a while now, been writing a musical based on the Romanovs, and some of that comes through on the Russian-flavored classical opening of the track. From there, it morphs into a 1970s hard rock jam, complete with big Hammond organ riffing, and finally into a Gutter Ballet-era Savatage song. That’s a lot of musical ground covered in four and a half minutes. It’s also a microcosm of the record, which features everything from blazing metal tracks to big, theatric numbers to soft, poignant vocal and piano pieces.

The record really captures the mood and feel of Savatage’s now classic rock opera Streets in its variety and power. Also like that record, some of the strongest songs here are the slower numbers. “Firefly” is a shining moment on the record, fueled by guitarist Matt LaPorte’s soulful, melancholy leads. LaPorte’s power is once again felt on “Open Your Eyes,” a Beatles-influenced number that finds Oliva sprinkling falsetto notes over his piano with a big bombastic bridge and chorus and LaPorte delivering a dramatic solo straight out of the Brian May playbook. (Queen is also a huge influence throughout the record.) “The Ride” may be the strongest track on the record, opening with a happy, jangly acoustic melody and then taking a turn into a more sinister chorus as the subject of the song is subjected to temptation. “Someone/Souls” closes the record with an emotionally-charged crescendo, just as “Somewhere in Time/Believe” did on Streets.

Not to worry, though, if you’re a metal fan. While Oliva has always been able to deliver top notch ballads, he also brings the rock here, too. “Before I Hang” will have a very familiar sound to longtime fans. A combination of the 1980s demo track ”Before I Hang” and the Streets demo “Larry Elbows,” the song, rightfully, sounds like a song taken from the Streets record and backs up the overall feel of "Global Warning." The digital feel and manic circus-style lead riff of “Master” should please, and “Stories” finds Oliva plying his theatric skills with the showtune-like gang vocals delivered over a pure metal track. “You Never Know” will probably have more old school fans banging their heads than any other track, as it sounds like it was taken straight from Hall of the Mountain King, a screaming, welcome, blast from the past.

Oliva’s voice, which has at times been a bit ragged over the past decade or so, sounds better here than it has in years. From his trademark Savatage shrieks to a gritty blues tone to crystal clear clean vocals on the ballads, he covers all the bases sounding like the late 1980s version of himself. There’s more passion packed into Oliva’s performance here than the last two JOP records and Savatage’s last record "Poets & Madmen" combined.

When I interviewed Savatage producer Paul O’Neill prior to the Trans-Siberian Orchestra tour last fall, he assured me that a new Savatage record will happen one day. But he also made it clear that it wasn’t a priority with several other TSO projects in the works. The good news for fans is that "Global Warning" will serve well as your new Savatage record. Most everyone will agree that bands can’t relive their best works, but Jon Oliva has done just that, reproducing the quality, vibe and feel of Streets here. It may not have the Savatage logo stamped on the cover, but this is a record that Savatage fans have been waiting on for a long time.