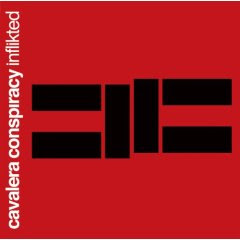 I can't deny that I've been waiting on this record for a long time. I was lucky enough to have a chance to see Sepultura live before they split with singer/guitarist Max Cavalera, and they destroyed the stage. Shortly thereafter, Max left amid some ugliness, and the band released a series of mediocre records that never really held my interest (even those that I initially liked, like 2006's "Dante XXI"). Meanwhile, Max took the sound of the band's more commercial "Roots" and made it even more accessible in Soulfly. While I admit I liked a lot of the Soulfly offerings, and they had a great live show, they don't stand up to the best Sepultura work at all.

Finally, though, Max Cavalera and his brother Igor have buried the hatchet and teamed up for this debut release from Cavalera Conspiracy. And finally, I've got the Sepultura record (pay no attention to the name on the cover, this is a Sepultura record) that we should have gotten after "Chaos A.D."

My favorite version of Sepultura was the middle version. While the early, more death-influenced stuff isn't bad, and the tribal sounds of "Roots" are OK, it's the groove-based thrash of "Arise" and "Chaos A.D." that made me a fan. On "Inflikted," the brothers Cavalera deliver a sound that's somewhere between that head-on thrash of "Chaos A.D." and the tribal grooves of "Roots" or Soulfly. It's a potent mixture. It opens with the title track, which might make you believe this will be a Soulfly record with Igor Cavalera on drums, but that changes with the pounding "Sanctuary," which introduces a return to the more aggressive Sepultura style, but also features a nice breakdown for Soulfly fans.

Certainly there are moments here that won't appeal to the unbending fans that hated "Roots" and Soulfly -- you know, the crowd that likes to throw the term sell-out around. There are undeniably some more commercial moments here than you would have ever found on one of those early Sepultura records, but then there are songs like "Hex" which digs even farther back for an "Arise," maybe even getting into "Beneath the Remains" territory a little, or the punk-influenced burner "Nevertrust." I happen to like a good groove, though, and this record has some great ones. The *gasp* hooks of songs like "Ultra-Violent" and "Bloodbrawl" and the screaming, bouncing riff of "Must Kill" will be with you long after you've finished listening.

"Inflikted" offers a perfect balance between heaviness and grooving melodies. It features songs that are hummable in one moment and bash your skull in the next. The tribal elements that colored "Roots" and Soulfly's sound are still there in places, but they're played down, putting the focus on a straight ahead metallic sound. It's a welcome return of a band that I've been missing for a good long while.

Hear a sample of "Sanctuary."