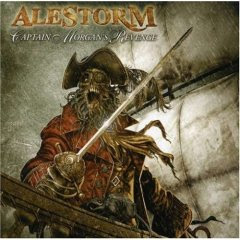 I've been recommending this record to people for months, so it's about time I get around to posting a review.

No description of Alestorm could possibly be better than the one they give themselves -- Scottish pirate metal. Blending power metal, keyboard lines inspired by the scores of countless pirate movies, the classic sea shanty and lyrics about sailing, wenching, grogging and pillaging, it's undeniably cheesy. It's also undeniably fun.

The folk metal elements of the music are obviously heavily influenced by Korpiklaani, but I find Alestorm's brand just a bit more fun. I can easily picture vocalist Christopher Bowes staggering around in full Jack Sparrow get-up and waving his cutlass in the air as he delivers songs like "Nancy the Tavern Wench," "Of Treasure" or the goofy "Wenches and Mead," which would be almost sexist enough to make the members of Motley Crue blush. But, we are talking about pirates here.

The record opens with the high seas adventure of "Over the Seas" which prepares the listener for the pirate power that's coming. The band covers a lot of metal ground over the course of the record. There's the pure power metal of songs like "Set Sail and Conquer," the Annihilator-inspired thrash of "Death Before the Mast" and "Terror on the High Seas," and of course the folky feel of "Of Treasure" and "Flower of Scotland." Alestorm does high speed blazers and mid-tempo songs equally well, as "Nancy the Tavern Wench" and the barroom sing-along shanty "Of Treasure" fare just as well as some of the more high octane numbers.

One of my favorite aspects of the record is the handling of the gang vocals. If you've listened to much power metal, you're familiar with its handling of those -- perfectly harmonized and tweaked within an inch of their life until they're as flawless as possible. Alestorm takes a rougher approach. They're not exactly what I'd call out of tune, but it's a little looser style that gives the impression of a group of salty dogs singing on the deck. When it works, as on the title track, which also stands as perhaps the strongest tune here, it's great. I dare you to listen to that chorus and not want to raise a pint and sing along. They do occasionally take it too far, though, as on the weakest number, "Flower of Scotland," where it sound too much like a rowdy, drunken, out of tune rabble. Of course, that's probably closer to the real pirate singing experience (if in fact there be such a thing).

Your tolerance for this record will probably depend on your tolerance for tongue-in-cheek humor in your metal. The dark, uber-serious crowd that rants about how "Metalocalypse" is making a mockery of metal will probably want to skip it. But if you enjoy a good laugh and some fun, well-played folk metal that doesn't take itself too seriously, definitely check it out. Alestorm's debut is silly and over the top, but it's still somehow enjoyable and quite addictive. Har, mateys.

Get "Captain Morgan's Revenge."
Posted by Fred Phillips at 7:20 PM