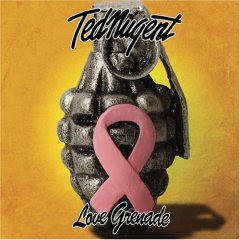 On his last record "Craveman," Nugent really got back to what he does best. He skipped the boys choir vocals of Derek St. Holmes and gave us a blast of full-on, rowdy Uncle Nuge. The result was a raucous and raunchy rock record that rivaled his best work. True, I like a few of the songs that St. Holmes sang, but what I really want from Ted Nugent is "Free for All," "Cat Scratch Fever," "Wang Dang Sweet Poontang." With the exception of "Dog Eat Dog" and "Stranglehold," all of my favorite songs are ones that Nuge sang himself. It's sort of like the David Lee Roth/Sammy Hagar situation in Van Halen. Sure St. Holmes and Hagar are better singers than Nugent or Roth, but they lack the character and charisma. And which one would you rather pay to see live?

Nugent also handles all the vocals on this record, and as you'd expect, it's huge, raw and bombastic. Nugent cranks out riff after riff in a celebration of sex, hunting and political incorrectness with few snoozers. The title track is a fairly generic 1980s-sounding Nugent tune. The softer, more reflective tune here, "Spirit of the Buffalo," also misses the magic he achieved with the similar "Fred Bear," despite some nice bluesy guitar runs. Beyond that it's full on, goofy Spinal Tap goodness.

Nugent hits his stride on the loud, out of control "Funk U." He cranks up his classic "Journey to the Center of the Mind," originally recorded with the Amboy Dukes, for the 40th anniversary of the song. He takes potshots at political figures in "Stand," and he breaks out the funk on the chorus of "Bridge Over Troubled Daughters." One of the strongest performances here, though, is also one of the more subdued, "Broadside." (That's right, I used the words subdued and Ted Nugent in the same review.) The song opens with a soaring riff that's not quite as raw and in your face as the rest here, and the Motown-style harmony vocals on the chorus are a nice touch. Of course, Nuge can't resist a bout of screaming insanity at the end of the song - it really wouldn't be a Nugent song without it, would it?

The Motor City Madman even manages to make the listener feel icky for singing along with a song in the special way that only he can on "Girl Scout Cookies." The song itself is just plain wrong, but damn that's a sweet groove.

If you go into this record thinking Nugent is an arrogant, loudmouth, sexist pig (and who doesn't?), "Love Grenade" definitely does nothing to change your mind. If you're looking for some greasy, rough around the edges rock 'n' roll that shoots from the hip, to borrow a line from a classic Nuge tune, this is just what the doctor ordered.
Read my review of the "Full Bluntal Nugity" DVD from a couple of years back.