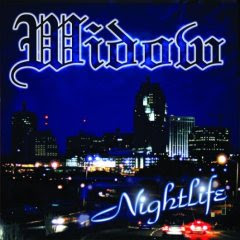 Man, what a difference a few years can make. When Widow’s 2005 release "On Fire" landed in front of me, I thought it was great. It was this campy, horror-themed traditional metal with just enough of a modern touch to make it interesting. It was definitely on the cheesy side, but the band seemed to embrace that cheesiness. I came away pretty impressed with what was a cliché-filled, but fun record that was hard to resist, sort of like Dream Evil’s last album.

With the 2007 version of Widow, the cheesiness is still there, but much of the fun is gone. There have been some lineup changes, most notably frontwoman Lili is gone, leaving guitarist John E. Wooten IV as the primary vocalist, with guitarist Chris Bennett offering up the screams. If you liked "On Fire," you’ll miss her. The middle of the road male vocals on that record are the majority of this record, and for the most part they’re bland. The songs fare better when Bennett starts screaming, but occasionally he veers too far into a screamo style that’s an instant turn-off, at least for me.

Granted, it’s tough to put any power in your vocals when you’re singing lyrics like “Teacher wants to see me after class/Always winks and shakes her ass/The teacher’s pet/I’m so good.” Sung with a little flair and fun, say the way David Lee Roth delivered “Hot for Teacher,” it could be pretty good. Sung the way Wooten sings it, not so much.

The covers here, Van Halen’s “Ain’t Talkin’ ’Bout Love” and Kiss’ “I Stole Your Love,” are hardly worth mentioning. Both are butcher jobs. They try to speed them up into power metal songs and add some screams, I guess to make them heavier, but most of us like the songs just fine the way they were. If all you can bring to the song is a faster drumbeat and a few screams, just play it straight.

The production is another issue. It sounds somewhat amateurish given the technology available. Being so obviously influenced by early 1980s metal from bands like Maiden and Priest, maybe they were going for that early Maiden feel. At times, though, the drums sound paper thin and hollow and some songs that are not bad suffer from the rough mix. The title track is a great example, with the vocals too far out front, giving it a really cheesy '80s sound.

The record’s not all bad, though. With a more in-your-face production, there are a few songs on here that could be pretty good. I really like “We Will Meet Again,” one of the heavier songs on the record. It reminds me of something off Into Eternity’s "Dead or Dreaming." Musically, I like the riffing on “The Teacher’s Pet,” but I just can’t get past the lyrical challenges. “I’ll Make You a Star” reminds me of some of 3 Inches of Blood’s better stuff, and “At the End” has one of the better openings on the record. It’s one of the few songs where the low end really makes an impact.

Widow's last record was a pleasant surprise for me, but Nightlife is a real disappointment. Though there are some bright spots, by and large it’s just a big mess. I think I’ll stick with Dream Evil for my cheesy fun.