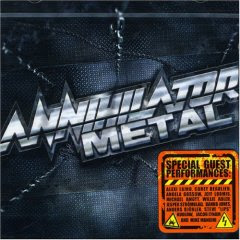 The name of this album pretty much says all it needs to say, right?

I still remember the first time I heard Annihilator. I was a senior in high school when a friend of mine popped "Alice in Hell" into the tape deck of my truck. When the soft, classical strains of "Crystal Ann" came out of my speakers, I was impressed. When the schizophrenic riffing of "Alison Hell" started, I was sold. It was some of the craziest stuff I'd ever heard, manic time and melody changes, but it all seemed to work. By the end of the day, I owned the album and I still consider it one of the greatest (and most underrated) thrash records of all time.

The band followed with "Never, Neverland," which was still a solid record despite being slightly less aggressive and having a new vocalist. Things began to unravel with the third record, "Set the World on Fire," which featured yet a third vocalist (who was not particularly appealing) and the band's least aggressive songs. Some were practically radio-friendly.

Since then, Waters and the revolving door of musicians have been hit and miss, but certainly he's hit more than he's missed. With this record, he goes for the Santana approach, bringing in guest stars from some of the biggest metal acts out there today. Including Jeff Loomis from Nevermore, Alexi Laiho of Children of Bodom, Anders Bjorler from The Haunted, Michael Amott and Angela Gossow of Arch Enemy, Jesper Stormblad of In Flames, Corey Beaulieu from Trivium, Willie Adler from Lamb of God.

To me, it's kind of strange that Waters brings in guest guitarists when he's one of the best out there. But after hearing the album, I think he probably should have stuck with guitarists. Make no mistake. This is an Annihilator record. Waters wrote all of the songs, and none of the guest musicians really make an impact on the sound. The guest singers on the other hand have a big impact.

In the early going of the record, the vocals are just not aggressive enough for an Annihilator album. As much as I like Nevermore, Loomis just doesn't do it for me on "Clown Parade," and Danko Jones is almost enough to ruin a good tune on "Couple Suicide." Then there's the kind of cheesy "Army of One," with its name-dropping and a chorus I just can't bring myself to sing along with: "We are an army of one." Ummm... OK.

But from the fourth track on, this record is pure Annihilator. It starts with "Downright Dominate," featuring Laiho. Dave Padden, who has provided vocals for the past few Annihilator records, moves back to a more aggressive sound and we start to get those snarled choruses I expect from the band. Waters himself takes a turn on vocals for "Operation Annihilation," which recalls the band's early work, and there are also some nods here and there that fans will appreciate, particularly little snippets reminiscent of "The Fun Palace" from "Never, Neverland" and "Criteria for a Black Widow" from the record of the same name. Waters is still one of the greatest technical thrash guitarists to ever strap up, and he proves it again with these riffs.

While it gets off to a rough start, over the second half, "Metal" transforms into a serious contender for my end of the year Top 10 list. It's the second killer album from Waters in a row. Maybe he's finally getting back on track. Now, how about getting this thing released in the U.S. so we don't have to shell out for the import?

Read my review of Annihilator's "10 Years in Hell" DVD.
Posted by Fred Phillips at 10:35 PM