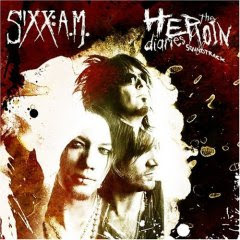 I'll admit it, I'm a Motley Crue fanboy. I own every record they've ever put out, even the really horrible stuff from the late 1990s, and "Shout at the Devil" would still make my list of top metal records. I've also at least checked out all of the solo attempts by the band's members. I've listened to Tommy Lee's laughable attempts at rapping and his pathetic attempts at showing his sensitive side. I've listened to Vince Neil try in vain to keep making Motley Crue records on his own. I've listened to Nikki Sixx's forays into punk with Brides of Destruction (which actually had some decent moments.) Ultimately, though it seems that every time I hear one of them, I have a lot more respect for Mick Mars.

So the latest is Sixx: A.M.'s self-indulgent "The Heroin Diaries," a soundtrack to Sixx's self-indulgent book of the same name. I heard "Life is Beautiful" on the radio, and thought it wasn't too bad in a radio-friendly rock sort of way. Sure beats the hell out of Nickelback. Then I took a listen to the album, which opens with "X-mas in Hell," basically Sixx rambling on about his drug abuse with, to borrow a phrase from the forums at Digital Metal, "a hackneyed use of Carmina Burana." He returns to that a couple of times during the record, mixing spoken word with a take on some classical piece.

To be honest, the Nickelback-like stuff on this record is really the best stuff here, and that's sad. The rest is Sixx trying to be the artiste that he's always wanted to be, but never really had the talent to be. Outside of "Life is Beautiful," the 1980s alternative rock-influenced "Pray for Me" isn't bad and a few of the other songs like "Dead Man's Ballet" and "Heart Failure" have their moments. But Sixx's attempts to channel Bowie and weave classical into the songs really just don't work. I mean, you just have a hard time buying the kind of depth this record is trying to sell from a guy that's been selling us sex, drugs and rock 'n' roll for 25 years or so.

I'm sure there are some devoted followers of the cult of Sixx (and yes, sadly enough, it does exist, I've met them) who will believe this is a masterpiece, and if I'm being honest, it is an ambitious project. Unfortunately, I don't think most people really want depth and introspection from Nikki Sixx. They want the kind of three-chord, fun rock 'n' roll that he got rich writing. The bottom line is that I'd much rather be holding a new Crue record filled with tunes like "Sick Love Song" from their best of compilation a couple of years ago, and that's the problem. Sixx and Lee can try to distance themselves from Motley Crue and try to prove that there's more substance to them musically, but at the end of the night the people in the audience really just want to hear "Shout at the Devil."

Get "The Heroin Diaries."
Posted by Fred Phillips at 11:55 PM