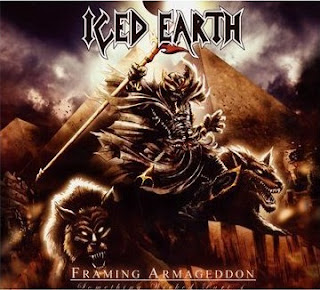 Albums with expectations are always interesting, and this one has plenty. First, fans have been waiting for it since 1998 when the original trilogy of songs appeared on "Something Wicked This Way Comes," regarded by many as the band’s best record. The expectations were boosted over the summer when the band released the first single “Ten Thousand Strong,” packaged with a stripped down, heavier re-recording of the original trilogy. So does this project meet expectations? I’m going to reserve judgment on that for the time being.


I’ll admit that my initial reaction to "Framing Armageddon" was a slight disappointment. It doesn’t have those big stand-alone songs that a record like "Something Wicked This Way Comes" or "The Glorious Burden" had. Sure, “Ten Thousand Strong,” “Order of the Rose” and some of the other songs can stand on their own, but this record is a different kind of beast. It took a few listens through for me to come around. This isn’t a record that can be carved into bite-sized pieces for mass consumption. It’s one that, to really appreciate, you have to listen to from beginning to end. Even the weaker moments on the record, like “Infiltrate and Assimilate,” add to the work as a whole.
"Framing Armageddon" is a rock opera in the truest sense of the phrase, meaning not only that it tells a musical story, but also that the sound of the work is, well, operatic. Many of the vocal harmonies and melodies on the song choruses owe more to musical theater than to Judas Priest and Iron Maiden. It’s particularly true on songs like “When Stars Collide (Born is He)” and “A Charge to Keep,” with their choir-like choruses. The album covers a lot of ground from tribal percussion to plodding hard rock riffs to the 1970s-style organ on “The Domino Decree.”
Though there are moments that don’t sound like Iced Earth, the basic feel of the band is there in the galloping riffing of songs like “Ten Thousand Strong.” As with most things that Jon Schaffer does, there’s a great attention to detail and a show of respect for fans that have followed them. There are some nice Egyptian/middle eastern themes that run throughout the record, and fans will pick up on quite a few links to the past. Most appropriate are the melodic elements that recall songs from "Something Wicked," particularly in the instrumental “Cataclysm.”
I continue to be impressed by the way that Tim Owens’ voice meshes with the music, and as much as I like the older records, I really think this is what the band was always meant to sound like. Here, Owens gets to stretch his vocals and be a little more expressive, from angry snarls to soaring, exultant high notes. Though the Halford-like screams are still there, on this record he finally manages to break away from his image as a clone of the legendary singer he replaced in Judas Priest and emerge as a dynamic vocalist in his own right.
In these days of disposable single-song downloads, it’s always refreshing when a band releases a record that demands to be taken as a whole. "Framing Armageddon" certainly does that. If you take the pieces apart, you lose the thread that makes the whole a great album. It’s easily one of the best releases of the year. So why am I reserving judgment? Because I haven’t heard the work as a whole yet. I look forward to hearing the second half, so that I can experience the story as it was meant to be heard.
Get "Framing Armageddon."
Posted by Fred Phillips at 7:40 PM