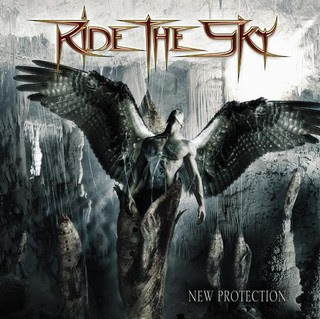 Ordinarily, I’m not a big fan of the “supergroup” concept. No matter how good the musicians are, I don’t think a month in the studio together can bring the tightness and spirit to a band that playing together for years, busting your ass to make it and living together in a van down by the river does. That said, occasionally one of those “supergroups” manages to make a pretty good record. That’s the case with Ride the Sky.

The band is a project of drummer Uli Kusch – a veteran of bands like Masterplan, Helloween and Gamma Ray – vocalist Bjorn Jansson of Beyond Twilight and Tears of Anger, and studio guitarist Benny Jannson. Later they added keyboard player Kaspar Dahlqvist who has played with Stormwind and Circle II Circle and bass player Mathias Garnas of XsavioR. The result is a pretty solid set of melodic metal.

Admittedly this record is a little heavier on the keyboards than I would prefer, but there are enough nice biting guitar lines from Benny Jannson on tunes like “Silent War” – one of the best tracks here – to hold my interest and make me overlook it. The songs on the album cover a wide range of styles and emotions. There are shiny, happy tunes like “A Smile from Heaven’s Eye,” which reminds me a little of Lillian Axe, then there’s the driving power-prog blend of “The Prince of Darkness” and the spacey synth lines on “The End of Days.” Of course, they do deliver up the prototypical power metal song that I was expecting with “Far Beyond the Stars,” but that’s really the only one here.

The soaring melodic songs like “Corroded Dreams” and “A Crack in the Wall” are really good, but Ride the Sky is at its best when they depend on Jannson’s guitar work. The best tunes here all have that in common. “Break the Chain” offers up a nice, chunky, almost thrash-like riff, and “Black Cloud” delivers up the heaviest number on the record with some very aggressive riffing at the opening.

If there’s one complaint it’s that they overuse the vocal-bass combination where the rest of the band drops out for the verse and there’s usually some effect on the vocals. They use that at least four or five times, and it occasionally gives the songs a feeling of sameness.

Overall, this is really solid stuff, though. It’s great melodic metal with occasional hits of symphonic, prog and power. I highly recommend it for people who like music that’s melodic, but not wimpy.

Get "New Protection."
Posted by Fred Phillips at 11:32 PM