Review: WhoCares, "Out of My Mind" 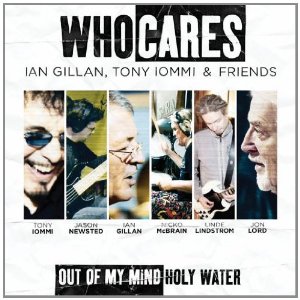 For all the mediocre music he shelled out under the Black Sabbath name following the departure of Ronnie James Dio, Tony Iommi seems to be making amends later in life. His reunion of the Dio-era Sabbath lineup under the name Heaven and Hell a few years ago produced the best Black Sabbath record (and it was Sabbath, no matter what the cover said) since the same lineup reunited in 1992 for Dehumanizer. Now, he’s back together with Ian Gillan, who fronted Sabbath briefly after Dio left, for a charity record to benefit the rebuilding of a music school in Armenia that was destroyed by a massive earthquake in 1988.

Since that earthquake, Iommi and Gillan, who helped in the original relief efforts, have spent a lot of time in Armenia. On a recent visit, they discovered a music school, which had been destroyed by the quake, still meeting and trying to carry on in tin sheds. On the flight home, the pair came up with the plan for a one-off project called WhoCares to help benefit the school. The result is a new single, “Out of My Mind,” out this month on EarMusic in Europe and Eagle Rock Entertainment in the U.S.

Just the reunion of Iommi and Gillan would likely be enough for most heavy rock fans, but the rest of the band reads like a who’s who of the genre. Gillan’s former Deep Purple bandmate Jon Lord handles the keys for the project. Iron Maiden drummer Nicko McBrain and ex-Metallica bassist Jason Newsted make up the rhythm section. Representing the younger generation is guitarist Mikko “Linde” Lindstrom of HIM, who, at 34, is 14 years the junior of Newsted, the next youngest member, and 35 years younger than oldest member, Lord, who is 69. But all that goes to show is age doesn’t really matter when it comes to good music, and “Out of My Mind” is really good.

This first single is very much in the Black Sabbath mode. The song opens with a low rumbling as Newsted thumps a bass line that sounds just a bit like the main riff of “Black Sabbath,” while Iommi provides a quiet, slightly distorted guitar lick. It slowly builds into one of those trademark Iommi power chord beasts of a riff, and Gillan’s vocals, even at age 65, are great. In fact, it’s kind of funny to watch the video for the song below and see this nice, grandfatherly looking gentleman and then hear the voice that’s coming out of him. Lord builds some dramatic flourishes on the Hammond organ on the chorus, which is really the only place you can hear him on the song, Iommi’s guitar dips down for an even deeper, darker growl, and Gillan continues to soar mocking vocals over the top of it. It’s a thing of beauty for an old metalhead.

A little later in the song, the assault is toned down for a softer interlude that sounds a lot like something from Ozzy-era Sabbath, right down to a more nasally vocal tone from Gillan. Iommi delivers a soulful lead, and after another trip down into that dark chorus, the song fades out with some slightly exotic sounding lead guitar licks. I’ll admit that I wasn’t a fan of Gillan-era Black Sabbath, but this song makes me a believer. Maybe it’s time I went back and gave Born Again another listen.

The b-side of the single (can you call it a b-side anymore?) is a song called “Holy Water,” which should please the other half of this band’s target audience. The song fades in with some Persian-flavored sounds before going full on rock. Lord has a more heavily featured role in this song, as his Hammond gets behind Iommi’s main riff and pushes it along. We get a bluesier, smokier vocal from Gillan that has a very late ’60s feel, and the song, overall, is more of a Deep Purple number. I prefer “Out of My Mind,” but then I also prefer Sabbath to Purple. You can’t really go wrong with either tune, though.

My only complaint with this project is that there’s not enough of it. I’ve been both anticipating and dreading a Black Sabbath reunion with Ozzy Osbourne because I know it can’t possibly live up to their first six records. After hearing “Out of My Mind,” I say let Sabbath rest in peace. I want to hear more from WhoCares — a lot more.

Posted by Fred Phillips at 5:59 PM