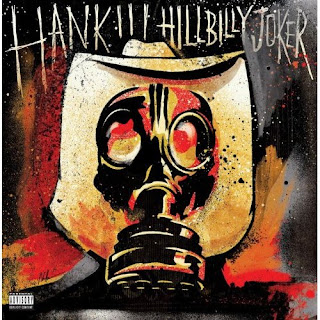 I debated for a while on whether or not to review this record – not because I don’t like it, but because of the back story. In case you don’t know, this isn’t a new record from III. Instead, it’s an album that was recorded some time ago. His record label at the time, Curb, refused to release it. Fast forward to 2010, III’s contract with Curb is done, and due to a string of disagreements with the label, including repeated delays of his 2005 masterpiece Straight to Hell, he’s not coming back. Now, the label has all of a sudden become interested and, thus, we have Hillbilly Joker.


The music won’t be new to Hank III’s fans. It’s been widely bootlegged under the title This Ain’t Country, and III himself has urged fans not to buy the Curb version but to get it through other means. That said, though, I believe it’s a record that deserves to be heard, so whether you buy Hillbilly Joker or get This Ain’t Country some other way, I’ll leave up to you. Just get it.

The bootleg title is a little more appropriate. This ain’t, by any stretch of the imagination, country. It’s what III terms his hellbilly style, a blend of rock, punk, hardcore, metal and experimental stuff, all tied together by the country twang of his voice. It’s not quite as heavy and abrasive as his other band, Assjack, but don’t go into it expecting Risin’ Outlaw or Lovesick, Broke and Driftin’ either.

There are a couple of differences in the tracklisting for the official release and the unofficial one. Missing from Hillbilly Joker are two really good tracks: the alternative rock-tinged “Hang On,” which is actually one of the more positive songs in this collection, and the high-energy swinging rocker “Runnin’ and Gunnin’.” Replacing them are the nicely grooving, “I’m Drunk Again” and the twangier “Hellbilly,” a live staple that features bits that are a little closer to his wilder country stuff. It would have been nice to have all of the tracks in one place.

Fans familiar with the Assjack record from a couple of years ago will recognize “Tennessee Driver,” which was recorded in a much heavier version for that album. The song on this record is just as energetic, but a little more laid back in delivery, and I prefer this one.

The centerpiece of the album for me, though, is the opening track, “Hillbilly Joker,” or “Hellbilly Joker” on the unofficial version. It’s one of my favorite Hank III songs, period. It opens in country mode, with a great, bouncing groove, then rocks things up a little for the chorus. It’s infectious, catchy and just a great all-around song. You can’t listen to it and not bob your head along with it, and it’s sure to be stuck there long after the song’s over.

It’s a recurring theme on the rest of the album – songs that are energetic and catchy and worm their way into your head. “Pistol Packin’” has a heavier, more metallic guitar riff and a little more screaming from III, but it maintains a great groove. “Now He’s Dead” features some White Zombie-ish electronics going on. “M.F.J.” is probably the heaviest track on the record, closer to Assjack than anything else, yet even it has a more musical feel than much of the raw aggression found on that record.

After releasing a couple of albums that were just OK to get out of his Curb contract, I’m waiting to see what the future holds for III. There’s been talk of more music in this hellbilly vein, there’s a doom/stoner rock project out there that he’s been excited about, and of course, we’d all like another bad ass country record. In the meantime, this record is an important part of his past and a big missing piece of the puzzle between his country and rock personas. It’s definitely worth hearing, if you haven’t.