Review: Black Label Society, "The Song Remains Not the Same" 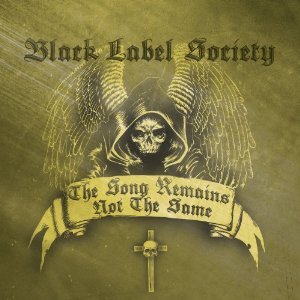 The days of getting a new Black Label Society record every year seem to be over, and that’s probably not a bad thing considering the way Zakk Wylde seemed to have burned out of good riffs on the band’s 2007 record Shot to Hell. So instead of a follow-up to last year’s outstanding Order of the Black, fans get the teaser record The Song Remains Not the Same.

We’ll put aside the bad title for the time being and dive right in. There’s no new material here. Instead, it’s a collection of four mostly-acoustic versions of songs from Order of the Black, four covers that all appeared as bonus tracks on various different versions of that album, an alternate version of “Darkest Days” featuring country singer John Rich, and an instrumental version of the Christmas carol “The First Noel,” which Wylde recorded for a guitar Christmas album some years ago.


We’ll start with the acoustic versions from Order of the Black. “Overlord” is the most upbeat of the bunch, transforming into a grooving, bluesy acoustic jam. The most dramatically different version comes with “Parade of the Dead.” One of the heaviest songs on the last record becomes a dark piano ballad. I’ll most certainly reach for the original version over this one, but it still has a certain appeal. There’s a more soulful feel to the song as a whole and particularly Wylde’s leads, which are the only electrics on the song. “Riders of the Damned,” I think, loses something in the translation. It had one of the best riffs on Order of the Black, but comes off kind of flat here. The best interpretation of the four, though, is “Darkest Days,” which remains largely unchanged in melody, substituting acoustic guitar for the piano of the original. The song was written for this kind of treatment, so it seems a little more comfortable in this format than the others.

Next up are four cover tunes that appeared on various versions of the last album – Black Sabbath’s “Junior’s Eyes,” Neil Young’s “Helpless,” Simon and Garfunkel’s “Bridge Over Troubled Waters” and Blind Faith’s “Can’t Find My Way Home.” The Sabbath tune, not surprisingly, is the one that’s the most in the Black Label Society wheelhouse. If anything, this version is more Sabbathy than the original, which was a funky, kind of strange song. Wylde and Co. slow it down and give it a much more doomy and dark feel. It’s my personal favorite of the covers. A close second, though, is “Helpless.” BLS has struck gold before with a Young cover, “Heart of Gold,” and they do it again here. It’s a fairly faithful version of the song, but still manages to be just a little more rugged and forlorn.

The only one of the covers that I don’t like at all is “Bridge Over Troubled Waters.” It’s a bit flat and lifeless to me, but then I’ve also always disliked the song. I think it’s overrated, and the BLS treatment doesn’t help it. The final cover is “Can’t Find My Way Home,” by Blind Faith, a supergroup of sorts that included Eric Clapton, Steve Winwood and Ginger Baker. The BLS version is, again, pretty faithful to original, but a little darker, without the hippie-dippy trappings of the late 1960s (and before the Clapton fans go after me, I happen to love the original.) It’s a good cover, but doesn’t even come close to the power of “Junior’s Eyes” or “Helpless.”

“The First Noel” is a good version of the carol with some nice guitar work, and included here just so fans have it, I guess, but I’m not likely to listen to it much outside the holiday season.

I wish I could say the record ended there, but there’s one more song that I have to talk about, the duet with Rich. It’s basically the same version of the song that appears earlier on the album, but with Rich’s vocals added. First, he shows up on “American Idol,” and now this. I’m beginning to wonder a little about Mr. Wylde. It’s not that I’m opposed to him working with a country artist. I happen to be a fan of real country music, and the song lends itself a little to that treatment. It’s just that I would have preferred him to work with an artist that plays real country rather than one of the guys in the vanguard of the candy-coated pop that’s the Nashville version of country these days. It’s a personal gripe, and I’m guessing most BLS fans will probably skip this version of the song anyway, so it hardly matters in the grand scheme.

The Song Remains Not the Same doesn’t offer anything truly new, but it’s a nice little teaser for fans. It offers some new takes on recent songs, and collects the bonus tracks from Order of the Black for those of us who were pissed off by the fact they were scattered over three or four different versions of the record and refused to buy them all just to get all the songs. This one’s mainly for hardcore fans.

This record was purchased by the reviewer. Review originally appeared at Teeth of the Divine.