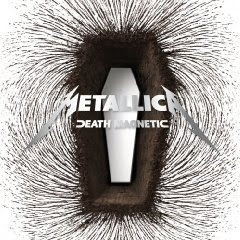 I know there are people out there who will hold a grudge against Metallica until the day they die. Over the past couple of decades fans of the band, as the song on Death Magnetic says, have been broken, beat and scarred, and a lot of them still have a lot of anger. To be quite honest, though, I’m too old for that. I don’t have it in me to hold that kind of grudge anymore, and no matter what you’ve done in the past, if you deliver an album I like, bygones are bygones. That’s just what Metallica has done.

First thing’s first. This isn’t the ’80s and Death Magnetic isn’t the second coming of Master of Puppets. It does, however have more in common with those 1980s records than anything Metallica has done since. Early reviews that called it a cross between …And Justice for All and The Black Album are, for the most part, pretty accurate. A closer listen, though will reveal snippets of just about everything Metallica’s ever done - good and bad.

Perhaps the best thing about this record is the return of Kirk Hammett’s wah pedal and the shredding he unleashes here. Frustrated after being told by producer Bob Rock that solos would make St. Anger sound “dated,” he takes those frustrations out here, wailing away at will.

The impact of bassist Rob Trujillo is felt early and often on the record, his first effort as part of the creative team. It’s the first time in a long time that the bass on a Metallica record has been memorable, and he brings a welcome groove on songs like “End of the Line” and “Broken, Beat and Scarred,” which despite being one of the less thrashy offerings is perhaps the best with the most memorable riff and hook on Death Magnetic.

And the thrash does indeed make a return here, as announced earlier with album opener “That Was Just Your Life.” It has a nice galloping rhythm from James Hetfield, reminiscent of …And Justice for All. Admittedly, Hetfield still struggles a bit vocally, trying to sing too much rather than barking the lyrics, but occasionally he does hit a note that reminds you of old times.

To say the thrash is back, though, is not to say it’s a return to their old style. There are a couple of nods to The Black Album with the hook driven “Cyanide” and “The Judas Kiss,” which echoes “Holier than Thou” in places. There are also a few notable misses. “The Unforgiven III” is just as bad as you’d expect when looking at the title, and the instrumental “Suicide & Redemption” is pretty much a snoozer. While I don’t mind a new Metallica insturmental, they set a high standard in the 1980s, and this one simply lacks the complexity and elegance of an “Orion” or “To Live is to Die.”

Rounding out the record are the requisite power ballad “The Day That Never Comes” which offers a nod to the band’s better ballads of the 1980s, and the thrash ‘n’ roll of “All Nightmare Long” with its fast riffing and hard rock vibe. The show closes in good form with what, for many, will probably be the star of the record, “My Apocalypse.” It’s the shortest track on the record and gets straight to the point, offering a tip of the hat to Master of Puppets.

Death Magnetic delivers a solid set of songs that features a nice blend of the entire Metallica catalog. No, it’s not the much ballyhooed return to their classic sound. Those first four records are classics that continue to shape metal, but that band is not likely to return. They’re older and they’re mellower, and I guess, so am I. I suppose, to make a bad pun, it’s all in the eye of the beholder, but I like it.