Review: Into Eternity, "The Incurable Tragedy" 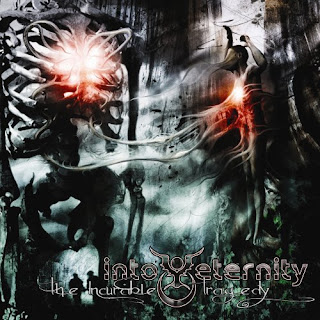 After three progressively more interesting records from Canadian prog/power/death metal outfit Into Eternity, "The Incurable Tragedy" became one of my most anticipated records of the year. Over the years, the group has morphed from a primarily prog band with some death metal leanings into a true amalgamation of styles, getting better with each record. That's why this one is a bit of a letdown.

It's not that "The Incurable Tragedy" is a bad record, it's just that it's not as good as the previous three and doesn't live up to the standard those set.

The biggest problem the record has is in the vocals of Stu Block and guitarist Tim Roth. Early on, Into Eternity used a lot of clean, proggy vocals with blasts of death growls. Over the past two records, they've added more growls and on 2006's "A Scattering of Ashes," Block introduced a Rob Halford-like scream that met with mixed reviews. Here, there's a black metal rasp and a Geddy Lee-type vocal in the mix. It seems the band throws everything they've got at the wall, and it's just too much. The screams are often annoying as Block takes them to almost chipmunk-like levels, and there's no consistency from song to song, or even verse to verse. It turns into a chaotic babble of voices that undermines the excellent musicianship on display.

The second problem is that the album, a concept piece about the loss of his father and two friends to cancer, is very bleak and morose. That's not always a bad thing, but here, it's somewhat draining. The songs also lack the big, undeniable hooks that the band has delivered in the past, perhaps because the subject matter didn't lend itself to that.

One surprise is the short melancholy piano ballad "The Incurable Tragedy I (September 21, 2006)." Lyrically, it has its challenges, being very straightforward and not very artistic, but it's a very strong piece that I found a real connection with due to recent circumstances in my personal life. It's an emotionally draining piece of music for me personally, but may not have the same effect on others. The other two installments of the title track have a similar effect, if not quite as much impact, though the Kirk Hammett-like lead work on "The Incurable Tragedy III (December 15, 2007)" is definitely a welcome element.

Not surprisingly, the album fares well with the rage and anger aspects of the storyline, as songs like "Diagnosis Terminal" and "A Black Light Ending," one of the stronger pieces on the record, bash away at the listener, unleashing pent up frustrations.

Musically, "The Incurable Tragedy" is as solid as the band has ever been. Roth and Justin Bender shred like crazy, and the rhythm section is tight. But someone really needs to rein in and tone down the vocals since the chaos in them undermines some otherwise solid songs.

Get "The Incurable Tragedy."

Posted by Fred Phillips at 8:58 PM