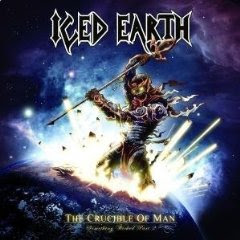 Let’s say you’ve got a car. It’s a nice car. It looks good, it’s dependable, it’s comfortable, it gets good gas mileage. You really like it. Then, let’s say, you get your hands on a sleek sports car that’s loaded with options. It’s faster, more powerful, has a little something extra. Then gas hits $4 per gallon and you have to put the new car in the garage and go back to your old one. You probably still like it, but you find it’s just not quite as nice as you used to think it was.

That’s sort of the way that I feel about the latest record from Iced Earth. It’s like that old car - it’s comfortable and dependable, but I’d still love to have that little extra bit of horsepower that Tim Owens injected.

The Crucible of Man isn’t a bad record. In fact, in places it outshines the first part of the saga Framing Armageddon. Guitarist Jon Schaffer delivers a few more memorable riffs and melodies here than on that record, and it moves a bit quicker as it covers less ground. Returning vocalist Matt Barlow shows just a little more range and a few more dynamics than in past efforts and really shines at times. There’s certainly an effort made here to appease fans of the Owens years with a more aggressive vocal style in many places. On the other hand Barlow’s Paul Stanley voice comes out - a lot.

It doesn’t help Barlow either that the best tracks on the record seem to have been written with Owens’ voice in mind. The lilting, exotic verse of “Minions of the Watch” and the snarls and highs of “Crucify the King” are handled well by Barlow, but fans of Owens won’t be able to avoid imagining what might have been.

Admittedly, Barlow’s voice does give this record a little more connection with the original “Something Wicked” trilogy, but it also makes it a little difficult to judge the concept as a whole, particularly since you switch vocalists halfway through the second act. The Crucible of Man probably fares a bit better as a standalone work than Framing Armageddon simply because it’s the wrap-up of the story rather than the set-up, and as the tale hits its climax, so does the record with tunes like the aforementioned “Crucify the King” and “Divide and Devour.”

In the end, I’m left feeling much the same way about The Crucible of Man that I felt about Framing Armageddon. There are some very good moments, but, like Judas Priest’s Nostradamus earlier this year, it really doesn’t live up to the grandness of the concept. It’s an ambitious idea stretched just a little too far, scattering the really good songs like the human race running from the story’s Set Abominae. If you compare the two records with the three original songs they’re based on, those first three songs are by far the stronger work.

There are certainly some songs that showcase Barlow, primarily slower numbers like “Crown of the Fallen” and “Harbinger of Fate,” and he does at least sound like he’s into the music again, unlike Horror Show where he just seemed to be going through the motions. Still, I can’t put aside my own personal disappointment in the lineup change enough to really get into this record. I’m sure there are legions of fans out there who will love it simply because of Barlow’s return, but personally, I think I’ll just wait for their next record and go for a fresh start.

Get "The Crucible of Man."

Posted by Fred Phillips at 6:46 PM