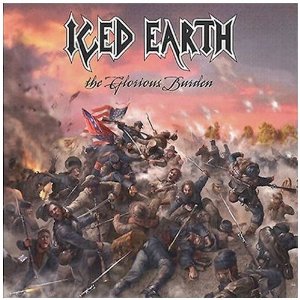 In the wake of Sept. 11, Iced Earth singer Matt Barlow decided that he wanted to do something for his country and joined the Department of Homeland Security. Jon Schaffer regrouped by picking up former Judas Priest singer Tim Owens, and the pairing turned out to be a potent combination on The Glorious Burden.

It’s a concept record of sorts, featuring songs based on historical events and figures. It’s a topic that Schaffer is passionate about, and it shows in the music. While the first disc of the two-disc set is outstanding, it’s the second disc that really shines. “Gettysburg (1863)” is a 32-minute epic in three parts, telling the story of the Battle of Gettysburg from the American Civil War. It’s bombastic, symphonic and quite possibly the best work of Schaffer’s career.

Things went downhill for Iced Earth from there with the Something Wicked debacle that saw Owens sing the first part and Barlow return for the second part, but for a moment, it worked marvelously.

2. Aerosmith, Honkin’ on Bobo. Yeah, I know it’s just a collection of blues covers and the only new Aerosmith song on the record sucks. But it’s still the first time that classic Aerosmith sound had come out to play since the 1970s, and it deserves second place for that alone.

3. Black Label Society, Hangover Music. While this was more or less a record tossed out to get BLS out of a contract, it still managed to put a spotlight on an often-overlooked strength of Wylde and the band – soulful, acoustic numbers. There are no ripping rockers here, but there are some very good dark and moody tunes.

4. Into Eternity, Buried in Oblivion. This record saw Into Eternity bringing a little more aggression into their sound. They ramped up the extreme parts, they got more proggy, and they still kept the melody that made their earlier work so interesting. It’s regarded by many fans as their best effort.

5. Dio, Master of the Moon. Granted, it may just be nostalgia bringing this record into the top five for me, but it was one of the best records of Dio’s later period. After Magica, I thought this was his best outing since Strange Highways.

6. Demons and Wizards, Touched by the Crimson King. Jon Schaffer and Hansi Kursch return with their side project. While I thought this record was good, it was really no match for the band’s first outing.

7. Saliva, Survival of the Sickest. Yeah, I know what you’re thinking, but this record had a lot of really good straight-up hard rock tunes. It remains the only Saliva record I own or like.

8. Damageplan, New Found Power. Though I was initially excited about this project from Pantera brothers Dimebag and Vinnie Paul, in retrospect, it was a little disappointing. That said, there are some good songs here, and I still enjoy the record.

9. Tesla, Into the Now. This is an overlooked gem from the band. Few people remember it, but it’s a solid set of hard rock.

10. Lamb of God, Ashes of the Wake. I really couldn’t get into Lamb of God until I heard “Laid to Rest.” That start-and-stop riff just grabbbed me by the throat and eventually won me over.

11. God Forbid, Gone Forever. I still think God Forbid is very underrated. Though it was their next record, Constitution of Treason, that I think was really their high-point, this one is great, as well.

12. Godsmack, The Other Side. Much like their big influence, Alice in Chains, Godsmack is a surprisingly tight acoustic outfit. The version of “Realign” here rivals the original.

13. Amon Amarth, Fate of Norns. This isn’t a favorite record of some fans, but it sure as hell sounds like Amon Amarth to me.

14. Machine Head, Through the Ashes of Empires. Though many consider The Blackening Machine Head’s “comeback” record after years of more commercial offerings, this one was pretty damned good, too.

15. Fear Factory, Archetype. Fear Factory teased fans with Archetype, a bit of a return to the old, heavier and less digital style. Then dashed those hopes on their next outing before finally recovering with 2010’s Mechanize.

Posted by Fred Phillips at 9:46 PM