Review: Demons and Wizards, "Touched by the Crimson King" 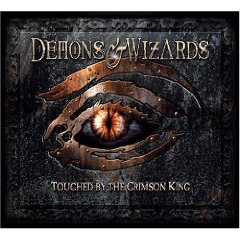 Imagine it's the mid-1980s and a new album has just hit the shelves featuring Glenn Tipton and K.K. Downing on guitar and Bruce Dickinson on vocals. So, neither Iced Earth nor Blind Guardian have had the incredible success or influence of Judas Priest or Iron Maiden, but for modern power metal fans the teaming of guitarist Jon Schaffer and vocalist Hansi Kursch is akin to that mythical pairing. It’s the best guitar riffs in the genre meeting the best vocals in the genre.

The two became friends as road dogs. Throughout the 1990s, the two bands toured Europe relentlessly, often together. Finally in the late 1990s, when Schaffer visited Kursch in Germany, the two sat down and jammed together. The result of that jam session was their first song, "My Last Sunrise," and eventually the 1999 self-titled debut from Demons and Wizards. It was a blazing album that rivaled the best work of their regular bands, but because of the schedules of Iced Earth and Blind Guardian, Demons and Wizards didn’t get to tour much beyond some European festivals. That’s also the reason it took six years for the two to get together and record another album – and again it doesn’t appear they’ll get to do more than a few shows in support of it.

"Touched by the Crimson King" opens with a nice operatic approach on the title track, which reminds me a bit of Carl Orff’s "Carmina Burana" or Jerry Goldsmith’s "Ave Satani." The rest of the song isn’t very different from what listeners heard on the band’s first album. It ranges from supercharged power metal runs to chugging traditional metal bits to haunting interludes to the operatic choruses. There are plenty of big, dramatic flourishes throughout the album, but they never cross over into the melodramatic as a lot of power metal bands do.

Schaffer and Kursch break from other power metal bands in other ways, as well. For one thing, there’s a great deal of variety on this album. "Terror Train" is a full-on power metal burner, with impossibly fast riffs from Schaffer, while "Beneath These Waves" is a mid-tempo tune that relies on some infectious melodic bits. The downside of that strategy comes on the melancholy "Down Where I Am." Lyrically, it’s a very dark song that requires a great deal of emotion, and I just never seem to get the full sadness from the vocals that should be there. It’s the only real misstep on the album, though. The other slow songs, "Seize the Day" and "Wicked Witch" both work incredibly well.

No Kursch album would be complete without literary references, and "Touched by the Crimson King" is peppered with them, beginning with the William Blake reference in the title. There’s also a nod to Stephen King’s Dark Tower series ("The Gunslinger"), "The Wizard of Oz" ("Wicked Witch") and Oscar Wilde’s "The Picture of Dorian Gray" ("Dorian"). Of the literary songs, the best is "Dorian," which has an irresistible traditional riff and an epic feel. The most interesting, on the other hand, is probably "Wicked Witch," which offers a sympathetic take on the character that’s one of the ultimate big bads in both literature and film.

If the album has one problem, it’s an issue shared by most power metal albums – the production is a bit thin. It’s not surprising in a genre that’s so focused on vocals and guitar. I can’t help but think how incredibly powerful this album would be if some of those super-fast double-bass lines were actually thumping you in the chest or if the punctuating drums on the title track or "Dorian" really thundered like they should. It’s not that the production is bad, just that it could have been more.

If you’re familiar with Blind Guardian and Iced Earth, the talent level on the album is exactly what you’d expect. Schaffer’s riffs are as fast, tight and precise as they come. I’ll admit that Kursch’s voice will probably be an acquired taste for some due to his thick German accent, but in terms of range and versatility, you won’t find a much better singer in the power metal genre. Both are in fine form here.

Kursch and Schaffer close the album solidly with a cover of Led Zeppelin’s "Immigrant Song." I’ve been waiting for a power metal band to take this song and really kick serious ass with it for a long time. It’s such a perfect song for the genre, from the riff to the lyrical content. Quite a few have tried, but Demons and Wizards are the first to finally nail it. Ultimately, I don’t think "Touched by the Crimson King" is quite as good as the 1999 album, which was a bit more fast-paced and had more of a medieval feel, but it’s still an outstanding offering. I only hope we don’t have to wait six more years for another one.

Get "Touched by the Crimson King."
Posted by Fred Phillips at 5:24 PM