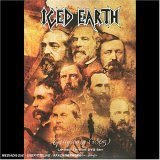 Being the jaded listener that I am, it’s gotten increasingly difficult over the years for artists to wow me with their music. There are plenty of albums out there that I like, but it’s extremely rare for a piece of music to completely blow me away. It happens maybe once or twice a year, if that. It only happened once in 2004, and that was in January, when I heard Iced Earth’s “Gettysburg” for the first time.

The 30-plus minute retelling of the pivotal battle in the American Civil War is, to me, easily the most powerful and passionate piece of music that Jon Schaffer and Co. have ever put on tape. You can tell that Schaffer put his heart and soul into the music, and the three parts of the work are so strong that you can almost smell the smoking gunpowder and hear the cries from the battlefield. That’s why I was eager to see what he would put together visually to tell the story on this DVD, and to be honest, I was a little disappointed.

The DVD presentation of “Gettysburg” is mostly made up of still images with some digital effects laid over them. There are a lot of maps illustrating the points of the battle and photos of the generals involved in the battle. There are some very nice visuals, like the waving flags that overlay some of the stills, but after you’ve seen it done five or six times, it’s not as interesting anymore. There are also some very powerful images, like the photos of haggard soldiers from the battle or the photos of bodies strewn across the battlefield in the aftermath. I really felt that, to match the power and energy of the song, we needed to see some of the action that was happening. I understand they didn’t have the budget to re-enact the entire battle of Gettysburg for this DVD, but the video ended up feeling more like one of those video presentations you see before a tour of the battlefield than something worthy of the music.

That said, there are definite reasons to check out this DVD. There’s a lengthy battlefield tour in which Schaffer and a guide from the Gettysburg site take viewers around the battlefield to see the sites in the song and talk about the things that were happening in the battle at certain points in the music. Being a bit of a history buff myself (and not having had time to fully explore Gettysburg when I visited), I was quite interested in this portion of the DVD. I also applaud Schaffer’s effort to reach out to Iced Earth listeners who may not have as much interest in history and try to help them relate to it through the music. This sort of documentary is not the kind of thing you expect on a metal DVD. There’s also a piece with Schaffer discussing his historical collectibles store The Spirit of ’76. It’s a little less interesting than the documentary, as it comes over more like a sales pitch for his miniatures.

The second DVD of the set features an interview with Schaffer and a couple of videos. The interview with Schaffer is interesting, but doesn’t really break any new ground if you’ve heard or read (or in my case, conducted) interviews with him before. The first video is for “The Reckoning,” which most people have seen. The second video is really the shining star of the DVD, though.

Most people have probably only seen clips of the video for “When the Eagle Cries” from the commercial for Iced Earth’s The Glorious Burden album. Even in that case, the album cover was blocking out images that the video channels deemed “unsuitable” to air. These “unsuitable” images are actually very strong and moving images from Sept. 11, 2001 – the inspiration for the song. It’s a real shame that the people who run the video channels seem to want to forget this event ever happened, because they’re missing out on an incredibly powerful video – one with much more substance than most of the junk they play. I guess they’d rather have a mindless twit in a short skirt shaking her ass than something that honors the heroes that emerged in the wake of the terrorist attack, shows a diverse array of people coming together and actually gives viewers something to think about. (We at MTV don’t want our viewers to think, just consume mindlessly. That’s why we exist.) This video alone is worth the price of the DVD for American metal fans. It’s a crying shame that you won’t see it anywhere else.