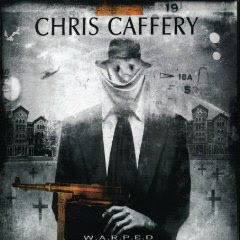 I’m not a big fan of mixing politics and music. For one thing, I’ve got a lot of strong opinions, and I’ve had otherwise good songs ruined for me because I couldn’t bring myself to belt out lyrics that I disagreed with. For another, I think when artists start to promote an agenda with their music, the message becomes the driving force and the music suffers. I know it’s a long-standing tradition, and I suppose if you’re doing acoustic folk rock where the lyrics are the primary focus it’s OK. In metal, though, I just believe the music should come first.

That’s why I was a little nervous when I picked up this latest effort from Chris Caffery, an expansion of the God Damn War EP that came along with last year’s Faces. Being the Savatage fanboy that I am, I didn’t want to dislike a Caffery album. I was pleasantly surprised. While there are a few moments of political posturing, for the most part he stays away from the politics and focuses on war itself. The overriding theme here is “war = bad,” which I think everyone, no matter what their political opinions or affiliations can agree with.

The album opens with the mid-paced clunker “Home is Where the Hell Is,” but picks up quickly with the second track, the previously released “God Damn War.” Listening to the song now, I think the same thing I did when I first heard it – this would be one hell of a song with Jon Oliva on vocals. It’s still a pretty good song with Caffery doing his best Oliva impression. It’s got one of the strongest guitar riffs on the album and really has the feel of a Gutter Ballet-era ’Tage tune – say, fittingly, “Of Rage and War.”

The first surprise of the album comes on “Election Day,” an old school Megadeth thrasher, complete with Caffery doing a pretty passable Dave Mustaine impression. He returns to the Megadeth sound on “Saddamize,” which has some really nice middle-eastern guitar-work and reminds me of some of the stuff on Rust in Peace, despite a white noise intro that goes on far too long. Another mid-tempo number, “Erase” has a memorable chorus melody, but once again I find myself missing Oliva’s vocals, which would have put the song over the top. It’s got a real Doctor Butcher vibe to it. The same can be said of the frantic “Edge of Darkness.”

Quite a few of the songs on this album suffer from simply not being very memorable. Caffery turns in nice riffs on most of the songs, but nothing about the rest of the song stands out. Great examples of this are the forgettable “Fool! Fool!,” “State of the Head” and “I.” I won’t even mention the version of “Amazing Grace,” punctuated with bomb explosions and gunfire, which, while I understand the reasoning, seems incredibly out of place here.

I finally get the blast of Oliva that I’ve been longing for on “Iraq Attack,” a song originally written for Doctor Butcher during the first Gulf War. It’s appropriate that they pull it out in a similar situation. It’s a darker piece, complete with Sirens-style shrieks, that would have been right at home on the Doctor Butcher album. The lyrics, at times, seem a little forced, but it’s still one of the strongest songs here. Caffery follows that up with the addictively catchy title track, which has a bouncy hook that won’t get out of your head. “Beat Me, You’ll Never Beat Me” has a satisfyingly heavy verse and chorus, with an acoustic bridge that finds Caffery doing his best Geddy Lee impression.

Ultimately, I don’t think W.A.R.P.E.D. is nearly as strong as Faces. But out of the 15 songs on the album, 10 of them are pretty solid. That’s not a bad average. Then again, I could also be jaded a bit by my frustration at not having had a new Savatage record in four years while Caffery and Oliva keep pumping out solo projects. Here’s hoping that once they get the new TSO album finished, they’ll finally get around to getting back in the studio with Savatage.