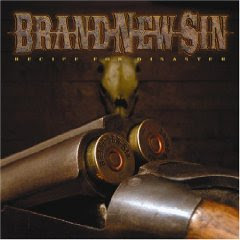 Ever wonder what it would sound like if Molly Hatchet’s music were as heavy as their album covers? Here’s your answer.

Take equal parts Molly Hatchett and Black Label Society, throw in a dash of Pantera and a pinch of Lynyrd Skynyrd, batter it up and drop it in the deep fryer. What comes out is a tasty Southern-fried treat known as Brand New Sin. But there’s a twist to this recipe. You see, despite the obvious Southern twang in their music, these boys don’t hail from Alabama or Georgia. They’re from Syracuse – yeah, as in New York. You’d never know it, though. They even have their own dirt-track race car. And it may be sacrilege for a Southern boy like myself to say this, but these Yankees can rock.

On this, their sophomore album and first for Century Media, Brand New Sin delivers up a collection of beefy hard rock guitar riffs that should please metal fans and big infectious hooks that could find some commercial success. I defy any fan of good, old-fashioned hard rock to listen to a song like “Brown Street Betty” and not walk around with the chorus stuck in your head for days. The band has toured with everyone from metal stalwarts like Slayer and Black Label Society to commercial bands like Breaking Benjamin and Saliva, and they’re one of those rare bands with the opportunity to be embraced by both camps of fans.

Guitarists Kenny Dunham and Kris Wiechmann are obviously disciples of Zakk Wylde. Their riffs are often punctuated by the pinch harmonic squeals that are Wylde’s trademark, and the first single, “Black and Blue,” seems ripped straight out of the BLS songbook. But the band brings enough of its own flavor to the table to avoid sounding like a cheap rip-off. Their influences are obvious in the music throughout the album, but they never sink into imitation.

The band does run into trouble on occasion when they stray into the slower end of the spectrum. “Running Alone,” which is actually more of a rocker played acoustic than a ballad, works well for them, but “Once in a Lifetime” sounds a bit too generic and drones on a bit too long. It’s an attempt at a Lynyrd Skynyrd-style ballad, but plays more like Nickelback or one of the other same-sounding rock bands you’d hear on the radio these days. The remaining slow song, “ Wyoming” is the longest on the album at just over six minutes, but doesn’t seem to have a lot for the listener to latch onto, especially compared to the rest of the album. The only thing that partially saves these songs is the strong voice of singer Joe Altier. He sounds like the bastard offspring of Ronnie Van Zant and Corrosion of Conformity’s Pepper Keenan. It’s a perfect blend with the band’s sound.

Where Brand New Sin really shines, though, is when they catch a good groove. One of the best examples is the aforementioned “Brown Street Betty,” which features an irresistible blues-rock guitar lick and a memorable hook. “Freight Train,” with its solid bottom end from bass player Chuck Kahl and drummer Kevin Dean, is another good example. They’re songs that will make even the most stoic rock fan want to bob his head and sing along.

In the end, this album is everything a good pure hard rock album should be. The songs are tight, short and punchy, and the album sounds good. They don’t chase trends or try to fit into a niche, but rather come out and do what they do – mow over listeners with songs that range from commercial ballads to traditional metal romps. It’s one tasty recipe.

Get "Recipe for Disaster."
Posted by Fred Phillips at 11:18 PM