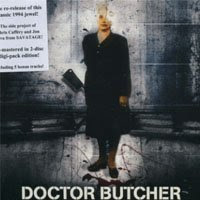 When the Doctor Butcher album originally came out 10 years ago, I ordered the import because I just couldn’t wait for a U.S. release. At the time, Jon Oliva had been all but absent from Savatage since the Edge of Thorns album, and even though I liked Zachary Stevens, I was really missing that old school Savatage sound. With Oliva and Chris Caffery, I knew it had to be good.

For the 10th anniversary, Black Lotus gives us not the follow-up album that Oliva and Caffery promised shortly after the original release, but a repackaged version of the original album with a few new songs thrown in for good measure. The good news is that they promise once again in the liner notes to do a follow-up. (But not before we get a new Savatage record I hope.)

When the album originally hit 10 years ago, I absolutely loved it. I was starved for that old school Savatage sound, something along the lines of Sirens, Hall of the Mountain King or Gutter Ballet. That wasn’t exactly what I got, but the album played enough on the darker side of the band to please me. Having not listened to the album in quite a few years, I wondered how it would hold up. As I said, then I was starved for that sound. Since then, I’ve gotten Savatage’s Poets & Madmen, with Oliva back at the helm. I’ve heard solid solo efforts from Caffery that evoke the Savatage sound, and of course Oliva delivered the excellent ’Tage Mahal under the Jon Oliva’s Pain moniker earlier this year. I’m not missing it quite so much these days.

I shouldn’t have been concerned. As soon as Oliva’s voice cut across the music in “The Altar,” I remembered how much I liked the album. It’s a bit grittier and less refined than the average Savatage album. With Savatage, you often feel like you’re listening to the metal version of symphony, but Doctor Butcher has a more balls-out rock ‘n’ roll feel, particularly on numbers like “Don’t Talk to Me” and “Reach Out and Torment Someone,” which still voices frustrations that most of us can relate to even in the days of the Do Not Call list. I still catch a little groove on the chorus of “Season of the Witch,” and I still love the childhood taunt chorus of “I Hate, You Hate, We All Hate.” So, yeah, 10 years later, I still really like this album. There are a lot of records I can’t say that about.

Though the information that came with the album claims that it was remastered, I can’t really tell a lot of difference. Perhaps the bottom end is beefed up a bit, but to my ears it’s still pretty much the same album from 1995. The thing that people who already have the album will be most interested in is the bonus disc with four tracks from the original Doctor Butcher demos, as well as a newly recorded song “Inspecter Highway” (and no I didn’t misspell “Inspecter,” it’s about a haunted highway.) Though it’s freshly recorded (and has better production values than many of the other songs) “Inspecter Highway” was written in 1993, so it still has the same feel as the rest of the album, with perhaps just a few tweaks. If not for those production values, I’d have trouble believing this was recorded recently because Oliva’s voice sounds better on this track than it has in a long time. It sounds like a Mountain King or Gutter Ballet era vocal line, complete with some Sirens shrieks.

The remaining tracks on the bonus disc have been available in varying quality via bootleg and the Internet for a while, but this is a chance to get them in CD quality format. Based on previous copies I’ve had, these do seem to have been remastered a bit. For the most part, they are weaker songs than those that made the album. “Born of the Board” is the most Savatage-like of any of the 16 Doctor Butcher songs, starting with a piano ballad and building to a crashing crescendo. But probably the best of the bunch is the full-blast rocker “Help! Police?” Lyrically, it’s not on par with Oliva’s usual work, but that adds to the feel of Savatage’s earliest work. Think Power of the Night.

If you missed this one the first time around, you should definitely check it out now.

Get "Doctor Butcher."
Posted by Fred Phillips at 5:36 PM