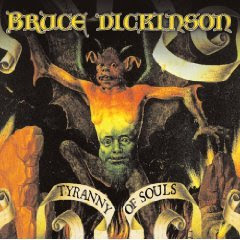 As the frontman for Iron Maiden, Bruce Dickinson has provided the vocals for dozens of bona fide metal classics. His forays into a solo career, however, have produced music both beautiful and horrible.

His first solo outing, 1990’s "Tattooed Millionaire," was a bit surprising as he tripped into classic rock mode. I actually quite liked the album – and still do – even though it was nothing like I expected. He followed those up with the too commercial "Balls to Picasso," which sounded like a hair band record, in 1994, and the too strange "Skunkworks" in 1996. He rebounded in 1997 when he was joined by another Iron Maiden alum, guitarist Adrian Smith, for "Accident of Birth." The album was more Maiden-like than the music Maiden was making at the time, and the album remains Dickinson’s strongest solo effort in my mind. He followed that up with the equally impressive "The Chemical Wedding" in 1998, again with Smith at his side.

A reunion with Iron Maiden produced two very good albums, 2000’s "Brave New World" and 2003’s "Dance of Death," but put his solo career on hold until now. This time out, he doesn’t have Smith as a collaborator. Instead, he turns to long-time producer Roy Z, who also played guitar and co-wrote those early albums. The difference is immediately noticeable. Roy Z’s guitar sound is somehow softer around the edges than Smith’s, even on a thrashing riff like the opening of “Soul Intruders” it doesn’t seem to attack the listener in the same way. It doesn’t make the album bad, just different.

“Abduction” opens the album with a sound that’s not too different from "Accident" or "Wedding." “Kill Devil Hill,” a song about the Wright Brothers, has a classic, epic Iron Maiden feel to it – think “Flight of Icarus.” It would have been right at home on their classic "Piece of Mind" album. Dickinson works out his well-documented David Bowie fetish on the mostly acoustic “Navigate the Seas of the Sun.” The song starts out OK, almost reminding me of “Taking the Queen” from "Accident," but it gets old pretty quickly.

If the first half of the album sounds a lot like Dickinson’s last two albums, the second half gives listeners a taste of the early albums. “River of No Return” has the kind of commercial hard rock bent of "Picasso," and “Believil” has the weirdness of "Skunkworks." It’s almost like getting an overview of his career in one album. But the star of the second half is “Devil on a Hog,” a straight ahead hard rocker, not unlike something from "Millionaire." It recalls the classic hard rock bands of the 1970s, and it has an infectious hook.

Perhaps the song on the album that’s most recognizable as Dickinson is the closing song and title track “A Tyranny of Souls.” It draws upon Shakespeare’s “Macbeth,” specifically the three witches, to tell a tale of the supernatural. It has that powerful, dramatic sound heard on so much of his last two albums.

Lyrically, Dickinson explores all the old familiar haunts. There are metaphysical themes, science fiction, history and flight – subjects that have been favorites of his throughout the years. He also shows his penchant for artistic depictions of good and evil by using a 15th century Hans Hemling depiction of hell that brings to mind "Chemical Wedding," which was largely based on the art and writings of William Blake.

"Tyranny of Souls" is yet another strong effort from Dickinson, who has excelled in recent years with or without his Maiden bandmates. With all that he’s got going on – from writing novels to getting a pilot’s license – it’s no wonder it took him seven years to give us a new solo album. It makes me wish he’d just concentrate on music and deliver a few more albums like his last three.

Get "Tyranny of Souls."
Posted by Fred Phillips at 5:27 PM