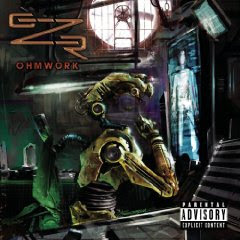 Black Sabbath bassist Geezer Butler said he didn’t want his GZR project to sound like a knockoff of his main band. To be honest, a steaming slab of Sabbath-style doom metal wouldn’t be a bad thing right about now. Instead, Geezer signed up three young guns, guitarist Peter “Pedro” Howse, singer Clark Brown and drummer Chad Smith, to deliver a mixed-bag of wannabe nu-metal (which is actually kind of old at this point, isn’t it?) that leaves me with a couple of questions. First, why would you want to be nu-metal, when you’re part of the rock that all metal is founded on? Second, why worry about sounding relevant when you’ve created so much music that is timeless? I don’t have the answers, and they’re definitely not apparent on this album, which without the presence of Butler probably wouldn’t have gotten a second listen from me.

To be fair, not everything about the album is bad. The opening track “Misfit” features a catchy riff and rocks in an almost prog mode with some nice hooks. The few rapped lines were easy to overlook for a Sabbath freak like me that really wanted this to be a good album. Throw in a little Sabbath-meets-Alice in Chains groove on “Pardon My Depression,” and I was actually starting to think they might have something here. The excitement ended when the third track, “Prisoner 103,” began. At best this song sounds like a bad Rage Against the Machine ripoff. At worst it sounds like Limp Bizkit. Neither is going to win points with me. While no other song on the album sinks to the execrable depths of that tune, nothing else on the album really excites the listener, either. The ballad “I Believe” and the pseudo-hardcore influence on “Pseudocide” are OK, but every time you begin to get interested in the album, they pull out a rap-metal number that ruins the mood. It’s almost as though the band can’t really decide who they want to be. By the time the only true Sabbath-style tune, “Alone,” arrives, you will probably have lost interest.

This album sounds less like Geezer’s project and more like a young band that hired him on for the name recognition. Butler’s bass, which was arguably the bedrock for Sabbath’s sound, is relegated to a minor role on most of the tracks. It’s solid, but unremarkable. The same could be said of every part of the album. Howse’s guitar riffs are OK, but with perhaps the exception of “Misfit,” I can’t remember them when I eject the CD. Brown’s vocals are pretty vanilla. They sound like a dozen or more other singers in the current commercial hard rock/metal scene, and there’s nothing that makes them stand out. Lyrically, it’s more of the same. They’re serviceable, but they don’t stick with you.

It’s not that "Ohmwork" is a bad album. It’s just plain and forgettable. If it came on the radio and the dial was stuck, I wouldn’t run screaming from the room (well, maybe if it was “Prisoner 103”), but it’s also not something I’m going to seek out.

Since Ozzy has said in no uncertain terms that he’s not interested in doing another Sabbath album, I suppose that the members of the band have to vent those creative urges elsewhere. I’d love to hear a new Sabbath album, but if this is the best that one of the principal songwriters has to offer, then maybe it’s better they don’t do another one. This isn’t the work of one of the godfathers of metal. This is a rambling attempt to chase current musical trends, many of which have already passed them by. A metal icon like Geezer Butler shouldn’t have to stoop to that.