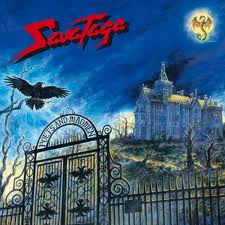 The field of candidates for 2001 wasn’t the strongest, but the year did see original singer Jon Oliva return to the helm of Savatage on Poets and Madmen. The album is probably the band’s least publicized and, possibly, least known, which is a shame because it’s a great record.

The record has a loose concept based around the work of journalist Kevin Carter, whose Pulitzer Prize-winning photo from the Sudan was featured on the tray card of the CD, but covered by a black-backed jewel case because of record company financial ills. It wasn’t until I interviewed producer Paul O’Neill just a few years ago and he told me the story that I even discovered the photo was there. Like all Savatage records, this one has great variety from big metal mashers like “I Seek Power” to tender piano-driven ballads like “Back to a Reason” to the more symphonic sounds of “Commissar.”

This record is bittersweet for me. Oliva returns to the vocals, and it’s a great record, but it was also the last Savatage record. Though I love most of the projects the guys are involved in now, and I love TSO, there’s just something about getting them all together that I like more. Hopefully we’ll hear it again at least one more time.


The rest:
2. Alice Cooper, Dragontown. The third in a trilogy of heavier records before Alice Cooper returned to his garage rock roots, Dragontown is the weakest of those in my mind, but still better than most of the stuff that came out in 2001. There are some great tunes like the dark title track and the rocking “Fantasy Man” and the industrial-tinged “Sex, Death and Money.” Alice rarely disappoints.


3. Opeth, Blackwater Park. This is Opeth’s finest moment, in my opinion. Everything comes together on Blackwater Park – the ghostly melodies, the death metal heaviness, the eclectic influences from middle-eastern to blues. Blackwater Park is majestic, brutal and beautiful.


4. Into Eternity, Dead or Dreaming. The second record from the Canadian prog-deathers was my introduction to the band, and I was blown away by it. “Absolution of the Soul” alone would put this record in my top five for the year, but there are plenty of other great tunes to choose from, too.


5. Disturbed, The Sickness. It’s been an up-and-down career for screaming nu-metallers Disturbed, but the band’s debut is one of the great albums of the movement. I remember first seeing them opening for Pantera on a short-lived HBO concert show (not the one the video below is from, but an earlier one), and I was immediately taken by David Draiman’s unique vocal style and the crazy melodies. I still am.


6. Ozzy Osbourne, Down to Earth. Down to Earth doesn’t get the credit it deserves. With the mess that Ozzy’s career has become in recent years, it’s easy to overlook, but there were some really good songs on this record. It’s not Blizzard or Diary or No More Tears, but it’s still a really good album and deserves to be heard.

7. The Cult, Beyond Good and Evil. I hadn’t thought about The Cult in a lot of years when this record came out, but the crunchy first single “Rise” caught my attention and drew me into the record. It remains one of my favorite works by the band.

8. Soil, Scars. “Halo.” Need I say more? The record is full of great, catchy hard rock songs, and I love singer Ryan McCombs’ delivery. I’m glad he’s back in the Soil fold after a few dismal years in Drowning Pool. Here’s hoping the band can come close to this one again.

9. Iced Earth, Horror Show. This is not one of my favorite Iced Earth records. I thought it was far too driven by the horror movie theme, and some of the songs seem a little forced and not up to par. There are some great ones here still, though.

10. Slayer, God Hates Us All. It’s Slayer. That’s pretty much all you need to know.

11. Black Label Society, Alcohol Fueled Brewtality. I like the live portion of this record, but the strength of it is in the second disc, which includes incredible covers of Neil Young’s “Heart of Gold” and Sabbath’s “Snow Blind,” a complete and effective reimagination of the song.

12. Arch Enemy, Wages of Sin. The first record with frontwoman Angela Gossow played pretty close the vest. I prefer some of the more melodic later records, but this one is still good.

13. Amorphis, Am Universum. Though I prefer older albums with more death influences, like Elegy, and the newer stuff with singer Tomi Joutsen, Am Universum is not a bad record.

14. Annihilator, Carnival Diablos. The short-lived reunion of most of the Alice in Hell lineup ended, and former Overkill guitarist Joe Comeau came on as the singer. The result was a record that’s OK, but not on par with Jeff Waters’ best work.

15. Rob Zombie, The Sinister Urge. There are some really good songs on this album, but it’s too short and there’s too much extraneous noise and filler on it.

Posted by Fred Phillips at 7:48 PM