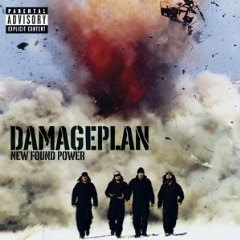 Pantera fans, rejoice. Founding brothers Vinnie Paul and "Dimebag" Darrell Abbott have called in reinforcements for their MIA bandmates and recorded an album that will have Pantera fans asking one question - Phil who?

They had big shoes to fill on vocals, but former Halford guitarist Patrick Lachman was up to the challenge. Lachman can do a spot-on Phil Anselmo impersonation in case the band wants to roll out some Pantera tunes, but he's also got a versatility that allows him to do much more than just be a clone of his predecessor. (Take a listen to "Reborn" or "Soul Bleed" to hear another side.) The band's tattoo artist Bob Zilla takes over on bass, laying down a solid bottom end.

With song names like "Breathing New Life," "New Found Power" and "Reborn," it's not hard to figure out that a lot of the songs are about new beginnings and reflect the band's struggles over the past few years. (There's also a very pointed jab at Anselmo.)

The album is a new beginning in more ways than one, though. Without the expectations of a Pantera album, Dime and Vinnie took the opportunity to stretch their songwriting skills, resulting in a much more varied album.

While numbers like the title track, "Breathing New Life" and "Explode" are ripped straight from the Pantera songbook, there are songs you'd never hear on a Pantera album, like the acoustic "Soul Bleed," the earthy "Moment of Truth" or "Pride" and "Save Me," which come down more on the commercial side of today's metal scene. In essence, they can have their cake and eat it, too, with pummelling songs that will satisfy Pantera fans and a few that could find crossover success.

Is it a new Pantera album? No. Half the album is too mellow, and it just doesn't have the same spark. But it's as close as we're likely to get.

Get "New Found Power."
Posted by Fred Phillips at 4:57 PM