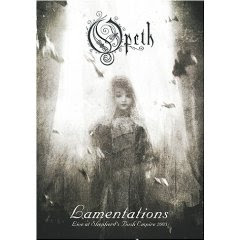 Recorded at the Shepherd's Bush Empire in London, the DVD features a real rarity, a complete performance of the band's mellow 2003 release "Damnation." That album, the companion piece to 2002's heavier "Deliverance," showcased the band's melodic side in a way that fans had never seen. It's a blending of folk, psychedelic rock and other influences with no distorted vocals and little distorted guitar, a stripped-down declaration of the band's talents.

The show chronicled on this DVD is a gutsy move for the band. It takes some moxy to take the stage in front of a group of rabid death metal fans and play what is, in essence, an acoustic set. Singer Mikael Akerfeldt makes reference a couple of times from the stage to the band being a little nervous, and well they should. Extreme metal fans are known for their fierce loyalty, but they're not known for embracing change in their favorite bands.

Opeth has always been the exception to that rule, though. They built their name on 10-minute epics with complex arrangements and strange musical shifts. Over the course of a 10-year career, the band has been constantly on the move, and most of their fans have followed. The evidence is on this DVD, as fans pump their fists with just as much vigor to the slower songs in the first set as to the metallic second set.

The band's performance is note perfect. There's not a lot of stage show - no pyro, no elaborate set, no rock star posturing. It's an honest performance from a band that's just happy to be doing what it does. (When was the last time you saw a rock guitarist take a minute to tune on stage, rather than just trading his guitar for a new one?) For Opeth, it's all about the music. But the live show is no less entertaining for that - in fact, it makes it all the more powerful, highlighting the band members' superb musical skills.

The band also uses the first set masterfully to build excitement, tension and drama for the second set. It comes to a head when the band launches into "The Master's Apprentices," throwing fans into a frenzy for the second helping, which focuses mainly on the "Deliverance" and fan-favorite "Blackwater Park" albums.

As an added bonus, the DVD contains a 65-minute documentary about the making of the companion albums "Deliverance" and "Damnation," which gives fans an insight into the internal workings of Opeth.

Get "Lamentations."
Posted by Fred Phillips at 8:46 PM