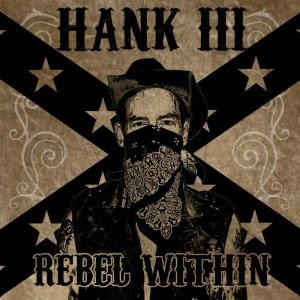 It’s not surprising that Hank III’s final album for Curb Records wouldn’t be his best effort. He’s been fighting the label to get the music that he wants to release out in a timely fashion for a long time and has been fighting to get out of the contract for years. “The Rebel Within” accomplishes that goal and starts a new era for III. Unfortunately for fans, it’s a seriously mixed bag with not a lot of real energy.

It’s not a complete throwaway record, though. There are a few definite reasons to check it out, the foremost being “Karmageddon.”
The most interesting song on the record by far, it plays like Johnny Cash meets the Doors, with just a little touch of Marty Robbins and R.E.M. thrown in. It’s an incredibly trippy number that’s not quite like anything he’s ever done, yet strangely fascinating and entertaining. Even if you don’t like III, it’s probably worth a listen. Album closer, “Drinkin’ Over Momma,” is likely to become another fan favorite, as if you couldn’t tell from the title. It offers up that beautiful blend of traditional country and humor that he does so well. “Moonshiner’s Life” is a fiddle-driven song that offers a little energy, reminiscent of something off his classic “Straight to Hell” record, though not quite as strong. Then there’s the uptempo rockabilly-bluegrass number “Tore Up and Loud” that offers just a taste of rock guitar riffing underneath.

Most of the songs here have something to recommend them, but at least half are pretty forgettable. “Gone But Not Forgotten” has a cool lonesome-sounding bluesy lead guitar lick, but the song drags on a little too long without much change. The same could be said of the familiar sounding “#5,” which is a good-enough melancholy piece, but not quite good enough for six and a half minutes worth. “Lost in Oklahoma” reminds me a bit of Hank Jr. musically, if not lyrically. The title track is aimed at fans of his more rock-influenced tunes, featuring backups from Assjack screamer Gary Lindsey, but they don’t quite fit as well here as on past numbers like “Long Hauls and Close Calls.”

At the bottom of the scale are songs that seem like throwaways, or at least tunes that needed a little more work. “Gettin’ Drunk and Falling Down” is one of those numbers influenced by his grandfather, but is a little too tired lyrically. Likewise, “Drinkin’ Ain’t Hard to Do” is an OK traditional country song, but the lyrics are weak. “Lookin’ for a Mountain” is a completely forgettable song that, after a few listens, I still can’t remember much about.

As with all of his more recent albums, there are a few songs here that will be familiar to fans of his live set. Lyrically, things are much as you’d expect, as well, with a lot of songs about hard living and hard playing, but there’s just not quite enough humor or fun in the music. It’s not a horrible record, but ultimately, it sounds like what it is – a record that gets him out of a contract. On the bright side, we can hopefully expect to see much more output and a much greater variety of music from III in the near future.

Get "The Rebel Within."

Posted by Fred Phillips at 5:19 PM