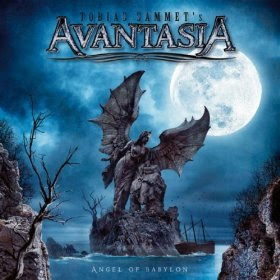 Projects that feature a who’s who of artists from a genre usually disappoint me. No matter the gathering of talent, it usually just doesn’t quite gel. One exception to that rule in the past has been Tobias Sammet’s Avantasia. Once again, for the most part, he overcomes that with the double release of The Wicked Symphony and Angel of Babylon. A big difference is that Avantasia remains Sammet’s vision, rather than taking on the characteristics of the other artists.

What he doesn’t overcome is the curse of the double album. Typically, they only contain enough really good material for about one record and some uninspired filler. It could be because I started with Angel of Babylon and was just tired by the time I got to the middle of The Wicked Symphony, but Angel seems to be the much stronger release of the two.


It doesn’t hurt that Jorn Lande handles vocal duties for seven of the 11 tracks on Angel and Jon Oliva handles one of the others. The record also features a vocal dream team for some, with Lande and Michael Kiske teaming up on two tracks, “Stargazers” and “Promised Land (Part 2).” The first is a bit lackluster, despite some solid moments, as it just seems to drag on too long. The second is a more uptempo traditional power metal number that fares better.

“Death is Just a Feeling,” featuring Oliva, is one of the highlights of both records. It opens as kind of a twisted gypsy melody with some chimes and a single violin that puts the emphasis on Oliva’s maniacal vocals. The soaring style of chorus isn’t typical for Oliva, but as we’ve already established if you’ve read my reviews long, he can do no wrong in my ears. That makes this easily my favorite track.

Another nice departure is “Symphony of Life,” which features some interesting synth work at the beginning followed by a nice heavy guitar riff punctuated by operatic vocal flourishes. Female vocalist Cloudy Yang brings a gothic feel to the tune that’s a little different from the rest of the songs. I really like the more sultry tone of her voice on the verse. It gets a little more dramatic on the chorus, but this is still one of the better songs on either record.

“Down in the Dark” shows off some nice guitar work from Sascha Paeth, and I love the bluesy old-fashioned rock guitar runs at the beginning of “Alone I Remember.” The latter has more attitude than just about anything here, especially on Lande’s verses, as the style really fits the tone of his voice. I end up wishing that Sammet would just shut up and let Jorn handle this one. The chorus spoils the song a bit, going limp and 1980s commercial. It’s a problem that repeats itself often in Sammet’s work, and on this record.

There are some snoozers, here. The ballad “Blowing Out the Flame” is just dull and “Journey to Arcadia” is a little too over the top with the musical theater-style gang vocals and flourishes.

Sammet has put together a solid group of musicians for the record. Joining the standing band of Paeth, keyboard player Michael “Miro” Rodenberg and drummer Eric Singer are guitarists Bruce Kulick, Oliver Hartmann and Henjo Richter, drummers Felix Bohnke and Alex Holzwarth and keyboardist Jens Johansson. Each gets his own spotlight, but it remains very much Sammet’s production.

It’s a solid record and better than its counterpart to my ears, but to be honest, I’d rather hear the best songs from both combined into a single effort.

Get "Angel of Babylon."

Posted by Fred Phillips at 4:09 PM