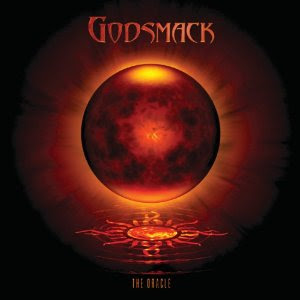 From time to time I catch a little grief in metal circles because I like some of the more commercial hard rock acts like Godsmack and Disturbed. Quite frankly, though, I’m way too old to play the “who’s more metal” game. I like what I like, even if it is commercial.

On their last record, “IV,” Godsmack experimented with some new flavors and sounds. I thought there was some good stuff on the record, but I didn’t love it. For their latest, “The Oracle,” they’ve returned to the sound that got people’s attention in the first place.
Nowhere is that more evident than on the opening track and single “Cryin’ Like a Bitch.” Allegedly written in response to a bad experience on tour with Motley Crue (and the lyrics would seem to bear that story out), the song is a statement that the band is done with experimentation and going back to the sound fans want. It’s a typical Godsmack stomp with grooving percussive guitar riffs, memorable melodies and a huge hook. It gets things off to a good start.

That’s the good news. The bad news is that it’s also one of only a handful of really strong performances on “The Oracle.”

They follow with “Saints and Sinners,” which features one of my favorite lyrics on the record: “I’m one part saint and two parts sinner, and the last part is still on the line.” It’s a more laid-back tune than the opener, and while good, it just doesn’t grab you quite the same way. The swinging riff and chorus of “War and Peace” is another favorite moment of mine on the record. It has the hallmarks of most of Godsmack’s work, but there’s an almost thrash melody on the chorus and the swinging, deranged Alice in Chains influence on the chorus makes it one of the standout performances. There’s a cool, if a bit commercial, guitar riff on the opening of “Love-Hate-Sex-Pain,” and the ever-present AIC influence is much more pronounced on the verse. I also like “Devil’s Swing,” though it has a bit less swing than the title would suggest.

Thankfully, the band doesn’t try too hard to recreate the success of hits “Voodoo” and “Serenity” here. “What If,” almost sure to be a hit, is about as close as they come with a slower verse that features some of the tribal-style percussion of those songs.

Another big influence on the band, Black Album and “Load”-era Metallica, puts in its appearance a bit later in the record on “Forever Shamed,” which finds singer Sully Erna doing his best Hetfield. Along with “Good Day To Die,” “Shadow of a Soul” and the title track, it’s part of a string of middle-of-the-road tunes that cause the record to fade toward the end.

Most of the songs here are solid performances and enjoyable if you like Godsmack, but nothing raises the record to the level of their best albums, the self-titled debut and “Faceless.” Throughout there are melodies and themes that may have “The Oracle” ends up being a bit like the band’s second record, “Awake,” a few really solid songs wrapped up in a likeable, yet a bit generic package.