Review: Poisonblack, "Of Rust and Bones" 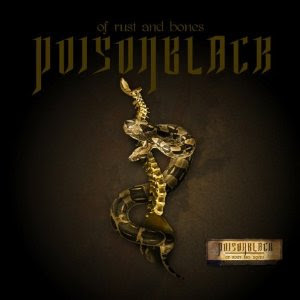 I could really use a new Sentenced album about now. Unfortunately, that won’t be happening, so I have to settle for the next best thing – singer Ville Laihiala’s Poisonblack.

My relationship with Laihiala’s side project turned main project has been up and down. I wasn’t wild about the debut record with a different vocalist, but the follow-up, Lust Stained Despair, with Laihiala back on the mic, was among my favorite records for 2006. When 2008’s A Dead Heavy Day came around, I couldn’t get into it. Granted, times were better then, so I just might not have been in the mood. Of Rust and Bones, on the other hand, has arrived with perfect timing.


This record continues in the vein of the later music from Sentenced. It’s a very hard-rock oriented variety of gothic metal that offers some shades of everything from The Cult to Metallica to Soilwork. The songs are punchy and catchy with big choruses, and despite the often gloomy subject matter, most of them just make you feel better. It could be that belting out the somewhat juvenile lyrics to a song like “Leech” just offers a release from the daily bullshit.

While much of Of Rust and Bones continues the Sentenced tradition, there are some very interesting moments scattered throughout the record where Laihiala and Co. go for a different feel. I like the opening of “Invisible,” which feels a bit like The Doors, and I like the subtle piano on the track. Some nice smooth lead licks follow (think Metallica’s “Fade to Black”) before it settles into more familiar territory for the chorus. Likewise, “Down the Drain” gives us a straight blues opening with a more metallic lead guitar laid over it. There’s also a pretty vicious break in the song about halfway through that leads to a strange, but effective, interlude with what sounds like a soft accordion. The blues-flavored lead licks return on the opening of “Alone” and “The Last Song,” the latter of which also features an interesting, if slightly commercial melody on the verse and a 1970s-flavored organ solo near the end.

It’s not all gloom and doom, though. “My Sun Shines Black” has a soaring, almost happy guitar hook and a nice chorus hook as well, and “Casket Case” thrashes along as the fastest song on the record.

Perhaps it’s unfair to compare Poisonblack with Sentenced, but it’s hard to avoid, not only because of the presence of Laihiala and his voice, but the song structures, mood and pretty much everything else. Fans of one band will likely appreciate the other. And while Of Rust and Bones doesn’t quite reach the level of Sentenced in my book, it’s about as close as we’re going to get, and that’s good enough.

Get "Of Rust and Bones."

Posted by Fred Phillips at 4:01 PM