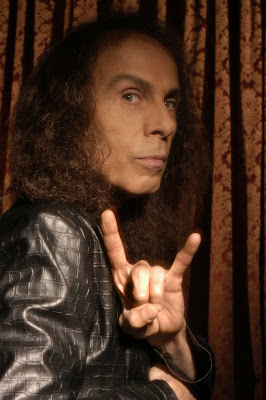 There’s no shortage of great things to say about metal legend Ronnie James Dio based purely on his body of work, from his earliest recordings with Elf and Rainbow, to his multiple stints with Black Sabbath and his stellar solo career. Inarguably one of the greatest voices in metal and the guy credited with bringing the “horns” hand gesture into the metal world (his superstitious grandmother used it to ward off the evil eye) Dio made the kind of impact on his genre that few artists achieve.

But in the hours after learning about his death, it isn’t so much his music that I keep thinking about, but a moment in the summer of 2002 when I had the pleasure and privilege of spending about half an hour with him.
While I’d been writing about music largely as an amateur since the mid-1990s, it was in the early years of this decade that I really started taking a more professional approach to it. One of the first few interviews that I conducted in that stage of my career was with Dio.

I don’t mind admitting now that I was scared to death waiting on that call. He was the first person that I had interviewed that could legitimately be called a legend. He was an artist that I’d grown up listening to and admiring, and he was certainly a personal hero of mine. He put me at ease right away, and to this day, many interviews later, it remains my favorite. We talked at length about his entire career, and as I fired off questions, some of which he’d probably answered hundreds of times before, and stumbled over my tongue, he treated me like I was the most important interview he’d ever done. When we finally ran out of time and he had to move on to the next writer in line, he told me to get in touch with his publicist and set up a longer interview so that we could talk more – and to this day I genuinely believe that he meant it and would have been happy to spend more time with me. Sadly, I never set that interview up, and now, I regret it.

It’s a story that, in the years since, I’ve heard told over and over by other writers and fans. There was no ego with Dio, and I’ve never heard anyone who met or interviewed him have a bad thing to say about him.

His musical legacy can’t be disputed. His career began in 1957, but it wasn’t until 1975, when his band Elf formed the backbone for Ritchie Blackmore’s new project, Rainbow, that he began to get the world’s attention. He produced three classic albums with Blackmore in Rainbow, and one of my favorite songs ever, the ballad “Temple of the King.”

When he came into Black Sabbath, he completely changed the sound of the band, making them unrecognizable from the classic records with Ozzy Osbourne at the helm, but just as good – some would argue better. If there’s a template for a great metal song, “Heaven and Hell” is it, and the album of the same name is easily one of the best ever in the genre. The most recent record with that lineup, now renamed Heaven and Hell because of a dispute with the Ozzy camp, “The Devil You Know,” was one of the best albums of 2009, even with Dio and his bandmates all in their mid to late 60s. Many may debate which Sabbath lineup produced the best music, but there can be no argument about who was the best singer. Dio’s crystal-clear tone and unmistakable voice was head and shoulders above just about everyone else in the genre.

While his solo career was a bit spotty in the later years, early albums “Holy Diver” and “The Last in Line” are the bedrock that traditional heavy metal is built upon. Those two records were the pinnacle of the epic, fantasy-themed style that was Dio’s trademark, but he also had room for more commercial fare like the keyboard-heavy hit “Rainbow in the Dark.”

The dark imagery of Dio’s songs led early on to his being considered “satanic” by groups like Tipper Gore’s PMRC, but a deeper look reveals the true themes of the music, the eternal struggle between good and evil. I asked Dio about being considered satanic in our interview, and, at first, he laughed, saying of his Black Sabbath bandmates, “I know just how un-evil those guys actually are.” He went on to quote to me a line from “Heaven and Hell”: “The devil is never a maker/ the less that you give, you’re a taker,” adding, “”We were not saying, ‘here comes the devil, he’s a great guy,’ it’s exactly the opposite.”

That’s also another great memory, outside of his songs, that he’s given me. After having Dio quote me lines from one of my favorite Sabbath songs, I was practically giddy for the next week.

My geeky fandom aside, the truth about Dio couldn’t be farther from the sinister images that some tried to paint of him back during those days. Charitable work was a mainstay for the singer throughout his career. Upset that the metal community was largely left out of 1980s charity projects from Band Aid and USA for Africa, Dio put together Hear’n Aid in 1985, a heavy metal benefit. Later in his career, he and his wife Wendy (who still serves as chairman of the group) worked extensively with Children of the Night, an organization with the goal of saving runaway children from prostitution. It was work that, when he talked about it, you could tell had affected him deeply. He wrote about the experiences in the song “Throw Away the Children” from 2002’s “Killing the Dragon.” Originally intended to be a benefit song for the charity, Dio’s frank portrayal of the situation was deemed too disturbing by some involved with the charity. The reality, he told me, was far more bleak. “I know all of these kids very well, and I’ve seen a lot of them die from HIV-related illnesses at 16 years old.”

Most of those who had dealings with Dio remember him as warm, welcoming and gracious. Even in his last months, as he battled stomach cancer, he remained ever positive that he’d beat it and be back on stage in front of his devoted fans in the near future. Sadly, the cancer was the one dragon that Dio couldn’t kill. So, yes, the world has lost a metal legend, but perhaps more importantly, it’s lost one of the genuinely good guys. He will be missed.
Read my 2002 interview with Dio.

Posted by Fred Phillips at 7:47 PM