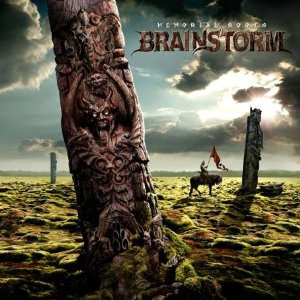 I’ve been a big fan of Germany’s Brainstorm since I discovered them with 2003’s Soul Temptation, and their last outing Downburst remains a favorite from 2008. When it comes to power metal with traditional leanings, the band is about as consistent as they come.

Their latest effort, Memorial Roots, which came out last year overseas and makes its way to the U.S. this year, doesn’t quite hit me as hard as Downburst did, but it’s still a solid and enjoyable effort.


It starts at a bit of slower pace with “Forsake What I Believed,” which features a solid traditional guitar riff and uses some more progressive leanings than I’m used to from the band. It’s a trend that will run through many of the songs, showing up on the verse of “Shiver,” the opening and chorus of “Nailed Down Dreams” and much of “The Final Stages of Decay.” Don’t get me wrong, it’s not a full-on progressive attack, just a little touch here and there that brings something a little fresh to the sound. There’s also a nice folky acoustic opening that I enjoy on “The Conjunction of Seven Planets.”

While I like all of those songs, it’s no surprise that I find myself drawn to the heavier songs on Memorial Roots, which are mostly toward the latter half of the record. Guitarists Torsten Ihelenfeld and Milan Loncaric show off with some huge traditional metal riffs. One of my favorites is “Blood Still Stains.” It’s one of the more aggressive tunes on the record, and a little Bruce Dickinson creeps into Andy Franck’s vocals on the track. It’s probably my favorite song on the record. Close behind, though, is “Victim,” which opens with another great traditional riff. In my mind it’s on songs like these, “Ahimsa,” with its fast riffing and atmospheric keys, and “Would You” where the band is truly in its element.

Franck, who is always impressive, takes on a grittier tone on some of these songs. He doesn’t quite show off his voice as much as usual, often singing in a more quiet subdued fashion, but it gives more impact when he does bring the power.

While Memorial Roots isn’t as memorable in my mind as Downburst was, it’s still what fans expect from Brainstorm – solid dependable songs without a lot of fancy trappings and no wimpy power ballads. It’s what a traditional metal record should be.

Posted by Fred Phillips at 3:26 PM