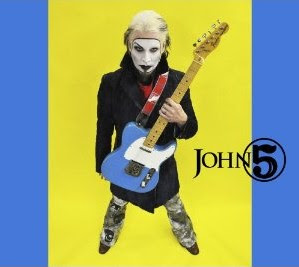 To be honest, I’ve been over the guitar god shred instrumental album for a long time now, but in recent years, I’ve become more and more impressed with the work of John 5 every time he pops up somewhere. That interest was enough to get me to give his new record “The Art of Malice” a shot.

Granted, there’s a lot of showy shredding here, as on any instrumental guitar record, but by and large the songs here are actual songs, not just a conveyance for John 5 to pack as many notes as possible into. Like any good tune, the songs here follow progressions and have solid hooks, albeit musical ones rather than vocal ones.


Another thing that strikes me about this record is the great variety of moods and styles that clash here. There are rhythms and grooves on the record that just put a smile on your face, and there are reflective, melancholy moments. The genres represented pretty much run the gamut from old-fashioned down-home country to charging, bashing metal. Of course, what else would you expect from a guy that's played for both Marilyn Manson and K.D. Lang?

“The Art of Malice” rocks straight out of the box with the catchy “The Nightmare Unravels,” which features the expected fast sweeping lead work. Then, the title track pulls in a little Spanish influence and the country twang from his Telecaster. It sounds a little like Roy Clark dabbling in Latin sounds. There’s definitely influence of guitar virtuosos who came before, particularly Joe Satriani on the high energy “Ill Will or Spite” and the crazy groove of “Ya Dig,” which blends elements of blues rock and country in a driving, high-octane shuffle.

There are plenty of those heavy rocking numbers here, including the big traditional metal riffing of “Wayne County Killer,” a personal favorite of mine. But, despite the cliché of the phrase, there really is something here for everyone. “J.W.” delivers a rockabilly boogie. “Can I Live Again” begins with a dark southern rock feel, reminiscent of “Floyd,” which he wrote with Lynyrd Skynyrd, and then moves into some soaring movie soundtrack-ish leads. “Steel Guitar Rag” is pretty much what the title says, with some wild old school country picking at the end. “Portrayed as Unremorseful” brings funk rock into the picture. “Fractured Mirror” is a trippy progressive number.

Album closer “The Last Page Turned” wows with an acoustic. It’s particularly striking coming at the end of a record that’s been all about shred, but John 5 proves with it that he’s just as good without electricity.

It’s almost insane how quickly this record goes from crushingly heavy to groove to twang, yet somehow it all flows. “The Art of Malice” proves John 5 to be as much a shredder as any of the guys that came out of the style’s 1980s heyday, but also a bit of a mad scientist, stitching together seemingly incongruous elements into an imposing Frankenstein monster.

Get "The Art of Malice."

Posted by Fred Phillips at 8:43 PM