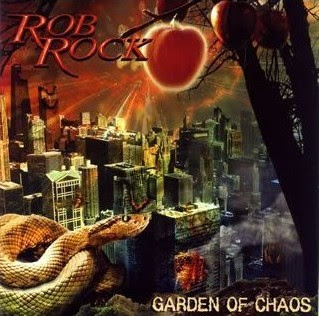 I remember being very impressed with Rob Rock’s last solo record, "Holy Hell." The Roy Z-produced effort captured the same vibe as Bruce Dickinson’s solo works without, of course, sounding like a Dickinson knock off. There’s still a bit of that sound on "Garden of Chaos," but I’m finding it much harder to get into this record.

The album seems to be a concept record of sorts, beginning in the Garden of Eden with the title track and following through modern days (though not all of the songs seem to play into the religion theme.) The record opens with the title track, which, while enjoyable, sounds just a little too generic to me. I’ve heard it all before. The second track, “Satan’s Playground,” is a step up. It’s one of the strongest here, playing like a "No Rest for the Wicked"-era Ozzy tune with Queensryche-style vocals. Joining it on the short list of memorable tunes here are “Spirit in the Sky,” which features some nice riffing and one of the more memorable melodies on the record and “This Time is the Last Time,” which despite being a very 1980s-ish song, is not a bad one. Also, “Metal Breed” displays a nice blending of the Maiden and Priest sounds, which are perfect for the “metal rules” subject matter, but like all such songs, the lyrics are pretty hokey.

Then there are a few songs that are memorable for the wrong reasons. The requisite ballad “Unconditional” is the weakest link on the record, and the attempt at an epic, “Ode to Alexander,” also falls flat. A couple of the songs – “Millennial Reign” and “Ride the Wind” – remind me of Stryper, though I will give “Ride the Wind” points for its opening riff.

The biggest problem for me with this record, is that there is so little about it that’s memorable – for good or bad reasons. Songs like the title track, “Savior’s Call,” “Only a Matter of Time” all kind of blend together. There’s nothing I can really say is bad about this record. The guitar work is solid, and Rock’s soaring vocals are great. While it’s in my CD player, I enjoy it well enough. When I take it out, though, there’s nothing that keeps playing over and over in my head.

Devoted fans of Rock’s previous work and those looking for a quick trip back to the 1980s style of melodic metal will probably find much to like here. Others may just want to take a quick stroll through this "Garden" and move on.

Get "Garden of Chaos."
Posted by Fred Phillips at 7:27 PM