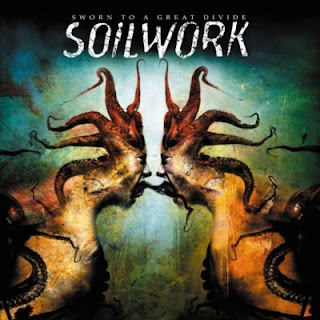 Soilwork’s last two albums, “Figure Number Five” and “Stabbing the Drama,” haven’t been big hits with a lot of fans. I’ll admit off the top that I enjoyed both records and both made my end of year lists when they were released. That said, this record blows both of them away.

“Sworn to a Great Divide” sounds like the record that Soilwork has been working toward since introducing some of the more melodic elements on “Predator’s Portrait.” Here, they offer up a nice balance of the two. The heavy parts are as heavy as they should be, notably the tune “The Pittsburgh Syndrome,” which recalls some of their pre-“Predator” efforts. The melodic bits and clean-sung choruses are some of the best and most memorable they’ve ever recorded.

As with all Soilwork releases, the musicianship here is great, and vocalist Bjorn “Speed” Strid really gets to stretch himself and show his versatility. From the screams and snarls of “The Pittsburgh Syndrome,” the title track and “Silent Bullet” to the undeniably catchy clean choruses of songs like “20 More Miles.”

While it still sounds like Soilwork, it’s more melodic territory than the band has ever tread before. The traces of their melodic death past are there, but there are songs here with no trace of that as well, like the bonus track “Martyr,” which brings in more progressive and traditional metal elements, with a great verse delivery from Strid.

And that’s the real power of this record – the memorable moments, and they’re not always those chorus hooks. There’s the opening verse of “Breeding Thorns” where the music cuts out to the background and Strid packs all the necessary brutality into the screamed first line, “You have not seen the last of me/ I’m breeding thorns.” There are the memorable opening riffs of “Exile” and “Your Beloved Scapegoat.” Perhaps my favorite moment, though is the aforementioned chorus of “20 More Miles,” which I haven’t been able to get out of my head since the first time I heard it.

To be honest, I don’t think Soilwork has ever made a remotely bad record, but with its perfect balance of heaviness and melody, “Sworn to a Great Divide” has to rank among their best.

Get "Sworn to a Great Divide."
Posted by Fred Phillips at 6:55 PM