Review: Helloween, "Gambling with the Devil" 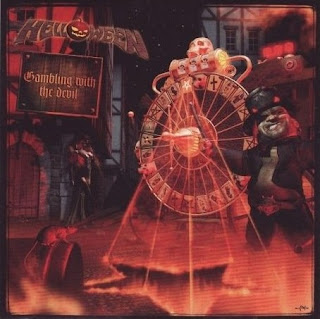 It’s always nice to be surprised. I’ve only followed Helloween’s career sporadically since the 1980s, and have never really found anything in their catalog that impressed me as much as the first two "Keeper" records. I didn’t expect to find it here, but they had me from the first true song on the record.

As with most intros, you can skip “Crack the Riddle,” but you can’t ignore “Kill It,” a snarling beast of a song that’s possibly one of the meanest and heaviest tunes Helloween has ever recorded. It hooks you with the soaring power metal bridge, then pummels you with the pounding chorus. Andi Deris’ vocals are probably at their best on this tune, and on the record as a whole. He moves through sounds that range from classic power metal to 1970s progressive to the aggressive “Kill it, kill it, kill it” screams on the chorus, to an almost black metal rasp coming out of the interlude. Unfortunately, no other song on the record quite lives up to “Kill It,” and for the next few songs, you’ll miss that aggression.

“The Saints” starts out well, but somewhere along the way morphs into that same power metal tune you’ve heard four billion times before. “As Long as I Fall” just reeks a little too much of 1980s power pop. But hang in there, because there’s some good stuff coming a little later, mainly in the form of a three-song cycle mid-record that serves as a mini-concept album.

It opens with the prog-power assault of “The Bells of the 7 Hells” which has the most irressistible hook to be found on the record. It’s a match for any soaring power metal tune in the band’s history. The second song, “Fallen to Pieces,” is softer with a slightly more mainstream bent, but it’s still a strong piece. With its electronic undertones, it really sounds like what they were going for and didn’t quite get on “As Long as I Fall.” The trilogy closes with one of the best guitar riffs on the record from Michael Weikath and Sascha Gerstner in the sliding main riff of “I.M.E.”

The final three songs on the record are hit and miss. “Can Do It” offers a really strange mix of showtune and 1980s power pop that just doesn’t quite work. “Dreambound” delivers a solid power/traditional metal number that while, not as engaging as “Kill It” or “The Bells of the 7 Hells,” is still entertaining, and “Heaven Tells No Lies” offers up an enjoyable shot at an epic, storytelling tune.

In the end, "Gambling With the Devil" doesn’t quite live up to the promise that “Kill It” makes, and on some of the tracks, I’m left wishing for that more aggressive sound. But it’s still a solid effort and the best record that Helloween has done in a long time. If you’ve liked Helloween in the past, but not lately, definitely give this one a shot.

Hear a sample of "Kill It."

Hear a sample of "The Bells of the 7 Hells."

Get "Gambling with the Devil."
Posted by Fred Phillips at 11:25 PM