Review: Rise to Addiction, "A New Shade of Black for the Soul" 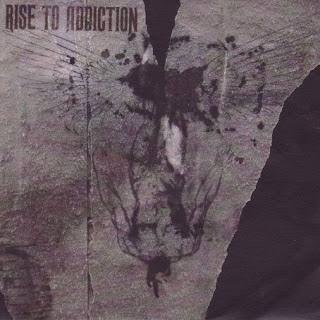 The Mausoleum debut of U.K. band Rise to Addiction, produced by Andy Sneap, has all the hallmarks of a band on the edge of great success. It has guitar riffs that are heavy enough to get the attention of metalheads and hooks that are big enough to stick in the head of mainstream rock fans. It’s a combustible combination that could find them on a radio station near you soon.

The opening of "A New Shade of Black" for the Soul suggests that this is going to be a catchy, mainstream brand of metal. The memorable “Cold Season,” which opens the record, would certainly be on the heavier end of the radio spectrum, but not at all out of place there. The following song, “Moth to a Flame,” cranks down the amps a little with an even more mainstream friendly chorus. Then, the band starts to offer up a little more meat for the metal fans.

The bouncing riff of “Falling as One,” and particularly the vocal delivery of Leigh Oates, reminds me a bit of the Anacrusis tune “Release.” The song has some progressive overtones on the chorus and some nice energetic riffing. Other songs on the record put me in mind of a cross between "Cuatro" or "Drift"-era Flotsam and Jetsam and "Badmotorfinger"-era Soundgarden, and that’s not a bad combination at all as far as I’m concerned. “One Sweet Minute” in particular opens with a plodding bass line and a vocal delivery that’s reminiscent of Soundgarden’s better work. “This Ride,” on the other hand, would have fit right in on either of the aforementioned F&J records, but brings in some of the Soundgarden sound on the chorus. The progressive sounds come out even more toward the end of the record with the laid-back bluesy jam of “Fessonia” and album closer “The Hive.”

Oates’ vocals are incredibly solid throughout the record, the guitar work of John Slater and Steve Wray is solid and bass player Joel Graham’s licks are dark and ever-present, but the real strength of A New Shade of Black for the Soul is in the songwriting. Nearly every song on the record is memorable in some way, whether it be the Zakk Wylde influenced riffing of the opening “Everlasting Wave” or the undeniable chorus hook of “To a God Unknown.” The band offers up great grooves, memorable choruses and an appeal that cuts across a variety of different genres from progressive to thrash to mainstream rock.

If you’re a fan of catchy, melodic metal with solid riffs, great vocals and big hooks, this is a release worthy of your attention. Go get it, ASAP.

Get "A New Shade of Black for the Soul."
Posted by Fred Phillips at 8:01 PM