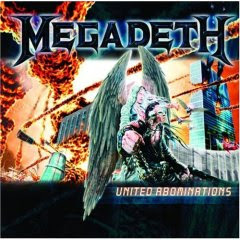 Here's a pleasant surprise. Yeah, I know a lot of people called Megadeth’s last record The System Has Failed a return to form, but personally I didn’t hear it. I thought that record had about three really good songs and a bunch of mediocre stuff that sounds like what Dave Mustaine’s been pushing for the past decade or more. This one, on the other hand, I would call a return to form, if that form is Countdown to Extinction.


I had my doubts going in, as I’d heard only the boring “Gears of War,” easily the most banal song here, and the remake of “A Tout Le Monde” with Cristina Scabbia from Lacuna Coil. To be completely honest, I like this version of the song better than the original, but I end up wishing that Scabbia was singing more (or perhaps even all) of it. Of course it does seem a little sad that Mustaine has to keep revisiting old songs to try to mine a big song (as he did with “Return to Hangar” a few years ago). It’s almost like he’s admitting he doesn’t have another great song in him.
With those two songs and the fact that I haven’t really liked a full Megadeth record since Cryptic Writings in mind, I was fully prepared for another record with a few exciting moments (a la “Kick the Chair” from The System Has Failed) and a lot of Dave jerking off his inner artiste. There is some of that here, but not as much as I’ve come to expect in recent years. The album opener “Sleepwalker” sets a good tone for the record. It’s an old-school thrasher that wouldn’t have been at all out of place on any of the band’s first four records.
After that track, this record settles into Countdown to Extinction territory -- a slower and simplified version of the frenetic riffs of the band’s earlier efforts, relying less on technical mastery and more on hooks and catchy bits. The best examples are “Never Walk Alone” and “Burnt Ice,” which are not nearly the heaviest songs on the record, but they will be the ones, along with the chorus of the title track, that you’re still humming a few days later.
There are a few failures here aside from “Gears of War.” There’s “Blessed Be the Dead” which has some really awkward lyrical moments as Mustaine describes the four horsemen. (You’d think Dave might shy away from writing a song about the four horsemen, wouldn’t you?) “You’re Dead” has a similar problem when he tries to make this weird melodic shift from the verse to the chorus that probably would have been really cool if it had worked. Falling in between is “Amerikhastan” that features a really annoying and preachy spoken word verse, but also has one of the strongest hooks on the record, reminiscent of “Architecture of Aggression” from Countdown...
There are a few blasts of thrash glory scattered here and there throughout the songs, but by and large this is the early 1990s version of Megadeth, a bit more restrained and perhaps a bit tamer, but still a potent force. A big point in the favor of this record is that the songs here seem just a little angrier than most of the songs Mustaine has done in recent years. He has that snarl back that’s been largely missing, at least to my ears, for a long time. The Drover brothers of Eidolon fame, and, strangely, former White Lion bassist James Lomenzo, form the backing band for Mustaine on this outing and handle the duties well.
It's always nice to be surprised by a band, particularly a former favorite that you’ve practically written off. No, United Abominations isn’t in the same league with Rust in Peace or Peace Sells... but it is the best complete effort that Megadeth has released since 1992.
Buy United Abominations.
Second opinion: This is one of those occasional records that I actually like better than my original review. Since the review ran, I've grown to like the title track, "Blessed Be the Dead" and "Amerikhastan" a bit more than I did when writing this review. ("Gears of War" still sucks, though.) This is a really, really solid album from an unexpected source.
Posted by Fred Phillips at 8:13 PM