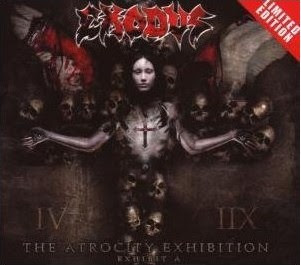 Since the time I would scream along the lyrics to “Deranged” while I mowed my grandmother’s yard as a kid, I’ve liked Exodus. I own most of their records and like most everything they’ve done, but, for some reason, I never really crossed over from liking them to becoming a hardcore fan. So, it’s funny that 20 years later, with most of the original members gone, I’m beginning to make that transition.

The new blood they’ve gotten in recent years has been good for them. Their 2004 record, “Tempo of the Damned” was hailed as a comeback by many fans, but I found it kind of bland. The 2005 follow-up, “Shovel Headed Kill Machine” was anything but. It topped my year-end list and set the stage for this record, which in a different year might have topped my list again.

Simply put, this is the heaviest Exodus record to date. New vocalist Rob Dukes (who debuted on “Shovel Headed Kill Machine”) continues to bring aggression that the band has never had on the mic. Guitarist Lee Altus and founder Gary Holt are locked even more tightly together on this record than on the last. Original drummer Tom Hunting returns for this record, which should please long-time fans, even if it doesn’t quite equal the work of Paul Bostaph on the last record.

The riffing throughout the record is brutal, cutting and memorable, beginning with the blast of “Riot Act” which clocks in as the shortest track on the record, but packs plenty of punch into that running time. Most of the songs, in the thrash tradition, are longer numbers which allow the band to stretch out a little, but they never let up in intensity through, arguably the best song on the record “Children of a Worthless God” and to the crushing closer “Bedlam 1-2-3.”

There is a little respite from the brutality at the end of the record if you care to wade through 10 minutes of silence (one of my pet peeves – just give me the other song already) with “Bonded by Banjo,” a bluegrass version of “Bonded by Blood.” Sure, it’s kind of goofy, but it gives the listener a little laugh after the heaviness and seriousness of the rest of the record and shows that no matter how pissed off they may be, the band still has a sense of humor about things.

With thrash rising among younger bands and a new generation coming around, it’s nice to see that some of the old guys can still kick their asses.

Get "The Atrocity Exhibition: Exhibit A."
Posted by Fred Phillips at 9:07 PM