Editor's note: Over the next few weeks, I'll count down my favorite records of the past year. For each I'll repost my original review if I wrote one, or write one if I didn't. Then, for those with a previous review, I'll offer a second opinion after time has passed. 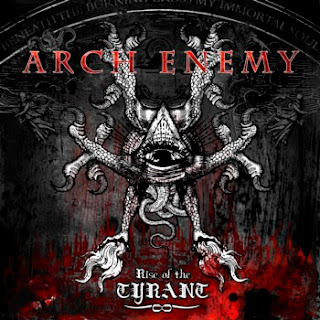 When Arch Enemy signed on Angela Gossow to provide vocals, a lot of fans wrote them off. Whether it was just the idea of a “girl” fronting a death metal band, or if they truly didn’t like her vocals, I don’t know, but it’s even hard for those folks to deny the power of their latest release “Rise of the Tyrant.”

Admittedly, I thought “Wages of Sin” and “Anthems of Rebellion” were pretty good records, too. But this one destroys both of those, as well as the mediocre “Doomsday Machine.” For me, it’s probably their best record ever. Gossow’s vocals have improved (though I was not one of those people that had a big problem with them to begin with), and drummer Daniel Erlandsson continues to provide a solid base. But the real strength here is in the guitar work of the Amott brothers, which offers a little more depth and melody than on previous releases.

Michael and Christopher Amott manage to do something on “Rise of the Tyrant” that’s truly unusual. This record is filled with huge hooks, but none of them are in vocal form and none of them make the music seem any less heavy. Instead, the Amotts lay down some incredibly catchy guitar riffs that will play over and over in your head well after you finish listening to the album. Just listen to the lead single, “Revolution Begins,” and see if you can get that guitar lick out of your head. Similarly, as much as I hate keyboards and synthesizers, I have to admit that the synth line on “I Will Live Again” is completely infectious.

There’s a nice mix on this record of songs that will appeal to fans of Arch Enemy’s Gotheburg death roots, like “The Last Enemy,” and much more melodic songs, like “Vultures,” which pulls in elements of traditional metal and straight up hard rock. A very nice touch running throughout the record is a trend toward thrash, heard particularly on songs like the title track and “Night Falls Fast.”

After the disappointing “Doomsday Machine,” “Rise of the Tyrant” is a fantastic comeback and points the way to a brighter future for the band.

Get "Rise of the Tyrant."
Posted by Fred Phillips at 7:40 PM