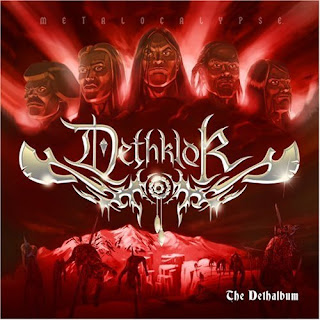 It could be a sad statement when a cartoon band puts out a record that’s a lot better than much of the output of “real” bands in a given year. In the case of Dethklok, though, it’s not so bad. See, this band — the stars of Cartoon Network Adult Swim’s series “Metalocalypse” and self-proclaimed most brutal band in the world — has metal cred that most fictional bands don’t.

The flesh and blood musicians on the project are series creator Brendan Small, who handles vocals and most instruments, and veteran metal drummer Gene Hoglan, known for his work with Dark Angel, Strapping Young Lad, Death and Testament.

Hoglan’s resume brings credibility to the project, but Small is no slouch. While he pokes fun at the seriousness that metal fans and bands take the music with in “Metalocalypse,” Small obviously has a great affection for the music and a certain reverence for it that shows in the songs on “The Dethalbum.” Fans of metal will hear traces of other bands scattered throughout the songs on this record, the most notable and blatant being the Amon Amarth sounds of “The Lost Vikings.”

Small delivers lyrics that are sometimes cleverly satirical and sometimes just plain silly in the most serious growl of Dethklok vocalist Nathan Explosion. (He also takes a hard rock turn providing the vocals for Pickles the drummer on “Hatredcopter.”) While the lyrics are, for the most part, tongue-in-cheek takes on some stereotypical metal themes, the music is as solid as it comes. Check out the groove of “Bloodrocuted” or the massive slab riffs of the brooding “Go Forth and Die.”

Those who believe metal is a matter of life and death probably won’t get this record. For metal fans with a sense of humor about themselves and their favorite music, it’s great fun.

Get "Metalocalypse: Season One" on DVD.
Posted by Fred Phillips at 9:06 PM