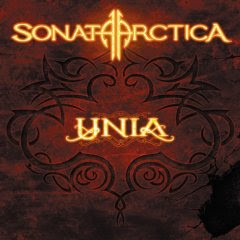 I'm big enough to admit that Sonata Arctica got a bit of a raw deal from me on their last record, 2004's Reckoning Night. It landed on my desk at a time when I was really burned out on power metal in general, and I just was not in the mood to hear it. So three years have passed, and I haven't been beaten over the head with quite as much bad power metal lately, so I figure I can approach this record with a clearer view. To my surprise, what I'm faced with is not really a power metal record.

Of course, there are still elements of Sonata Arctica's past, the occasional lightning riff or gang vocals, but this album is slower, more melodic and darker than what fans may expect of the band. The first thing I notice about Unia is that the guitar sound on this record seems to be a little more biting and dynamic. That's a good thing. The second thing I noticed is that the keyboard is much more pervasive. That's generally a bad thing. It works on songs like "Caleb," which opens with a nice little piano intro and then uses the keys for a symphonic effect, but there are several times on the record when it's way too much.

Sonata Arctica's results from the new approach are mixed. Generally, when they throw some of their old power metal influence in, as on "It Won't Fade," one of the better tunes here, they fare better. Another really good moment is the opening of "Fly With the Black Swan," which juxtaposes a bouncing metal riff with a bluesy slide guitar underneath. It's an interesting choice, but a definitely cool sound. Sometimes the slower songs, such as "For the Sake of Revenge," that go for the brooding effect, just end up boring.

I keep getting a really heavy early Queen vibe off of this record, maybe Queen II, which certainly could be considered a forerunner of power metal. After listening to "The Vice," hands down the best song on the record, my mind keeps drifting toward "March of the Black Queen." It's got that same cool, operatic and medieval feel to it. I'd love to see them do more stuff like this. The Queen influence is all over the record in both melodic choices the band makes and the vocal inflections of Tony Kakko.

For hardcore fans of Sonata Arctica, this could well be a disappointing record. It's very different from anything the band has done before. To me, though, it's one of the more interesting records of their career. Sure there are some moments that fall flat, but there's also a great deal of creativity and experimentation - things that I believe are way too scarce in power metal these days.