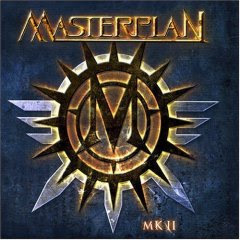 I enjoyed Masterplan's last record, "Aeronautics," and was looking forward to hearing the follow-up. Perhaps its because of the loss of vocalist Jorn Lande or perhaps its because I'm listening to it shortly after I've been impressed by the chances taken on Sonata Arctica's latest record. Whatever the case, I'm underwhelmed with what I'm hearing here.

Band leader and ex-Helloween guitarist Roland Grapow still provides top-notch guitar work, particularly on tracks like "Lost and Gone." The vocals of ex-Riot singer Mike DiMeo are not bad, though I do prefer Lande's. But I'm just not finding anything that excites me among the 12 songs on this record. It's very well done, but it's exactly what you expect - no chances taken, no unexpected moments.

There are plenty of good songs to be found, like the aforementioned "Lost and Gone" and "Take Me Over," which opens with a nice dark acoustic piece before exploding into a raging, squealing riff. The exotic melody of the main riff of "Call the Gipsy" is nice, too, making it probably the best song here. There's a nice variety of songs from fast-paced power metal tracks such as "Watching the World" to more progressive numbers.

I'm struggling for more to say about this record, particularly after the glowing review I gave their last record, but I can't find it. Bottom line, it's a good record, melodic metal fans should like it, but it won't blow you away.