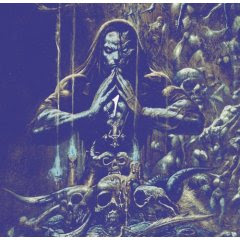 So, the question is should you drop 25 bucks on a double album of unreleased stuff by Danzig? If you had asked me that in 1992, I wouldn’t have blinked an eye before saying yes. I would have found a way to get my hands on what, at that time in my life, would have been a hell of a lot of money for a record. At that point, the first three Danzig records were among the favorites in my collection ("Lucifuge" would still be on my desert island list). It’s been 15 years, though, since the release of "How the Gods Kill," and the records that have come since haven’t exactly inspired my confidence.

"4p," is considered a masterpiece for some fans, but for me it was just OK. The same goes for "Satan’s Child," though when it was released after the techno-industrial "blackacidevil," it seemed like a great record by comparison. "I Luciferi" had some of the elements of his early records, but couldn’t come close to capturing the same dark mood or menace. And to be honest, I’ve never heard "Circle of Snakes" because after his publicist at the time decided that I could review the record from short snippets of each song and didn’t need a full copy of the album, I just never got around to picking it up.

So, long story long, I had to be convinced to go out and give "The Lost Tracks of Danzig" a try. I’m glad I did. Is it a masterpiece? No. Is it worth $25? For a real Danzig fan, yes. If you’ve been craving that old school, basic drums, bass, guitar and vocal approach of Danzig’s early records, that blend of punk, metal and bluesy hard rock sensibilities, the first tracks on this record will be a welcome blast from the past.

The opener “Pain is Like an Animal” was reportedly written for Samhain, but would have been a damned fine addition to the first Danzig record. Fans of the old Danzig style will find a lot to like on the first disc, which digs back into tracks left over from those albums. Nearly every one is built on a great riff, though the overall results are mixed. Some seem a little unformed or unfinished, like “When Death Had No Name,” which we’re treated to twice here. The first version starts cool, but seems to drone on too long. The second is slightly better, but still not great. The weakest by far, though, is “Cold, Cold Rain” a run at one of those slow songs like “Sistinas” or “Blood and Tears” that just comes off as a really bad Elvis impersonation.

More uptempo numbers like “You Should be Dying” and “Angel of the 7th Dawn” catch that nice groove that Danzig’s best work always had. They’re not perfect tracks, but then that’s why they were unreleased. One of the more interesting tracks here is the racially-charged “White Devil Rise,” a song supposedly aimed at controversial Nation of Islam leader Louis Farrakhan. It’s not a great song, and with lyrics that seem to support a race war, it’s easy to see why it wasn’t released. But it’s an interesting song to ponder on several levels.

There are also a couple of "blackacidevil" outtakes at the end of the first disc. “Deep,” like most of that record does nothing for me, but “Warlok” is kind of an interesting dark and droning tune that’s a bit better than most of the stuff on that record.

Easily the two strongest songs on the first disc, aside from “Pain is Like an Animal,” are his cover of T. Rex’s “Buick McKane” and the acoustic version of “Come to Silver.” I was quite surprised with the “Buick McKane” cover since the kind of happy-go-lucky song seems so different from Danzig’s usual fare. “Come to Silver,” though, is easily one of the best performances on either disc. Originally written for Johnny Cash, Danzig recorded a version of the song on blackacidevil. It was one of the best songs on that record, but that’s not saying much. This is a completely different song. Here, he breaks out an acoustic guitar and performs the song as Cash might have. It’s an understated, yet powerful performance that seems at least in part a heartfelt tribute to a man who displayed just as much attitude and intensity as any heavy metal great. If you only listen to one song on this record, make it this one.

The second disc covers the more recent years of Danzig’s career. I thought I’d be less interested in it, and overall, I am, but there are some surprisingly strong moments scattered throughout it. Chief among them is the song he’s chosen as the lead single, “Crawl Across Your Killing Floor.” The tune is a dark, blues-inflected song that blends some of the best elements of past and present. It would have been a great song to build an album of new material around. “I Know Your Lie” and “Who Claims the Soulless” also catch good grooves, even though they seem nu-metalish at points, and there’s another surprising cover to be found in David Bowie’s “Cat People.”

The big riffs pop up again later in the second disc with the straight-up hard rocker, “Soul Eater,” which is infectious despite not having the greatest lyrics on the record. And I even have to admit to liking the 1960s-influenced groove of “Lick the Blood Off My Hands.”

“Lost tracks” records are often just an excuse to make a buck off of stuff the artist has laying around, and it’s usually easy to see why the tracks were lost in the first place. While that’s certainly the case with some of the songs on this record, there are also a lot of gems here, too, though admittedly some are in the rough. For casual fans of Danzig, I’d probably recommend picking and choosing what you like, but for the real Danzig fan, I’d say this record is a must-have.

Read the Stuck in My Head feature on Danzig's "Come to Silver."

Read my reviews of past Danzig records.

Get "The Lost Tracks of Danzig."
Posted by Fred Phillips at 10:10 PM