Stuck in My Head: Iron Maiden, "Hallowed Be Thy Name" 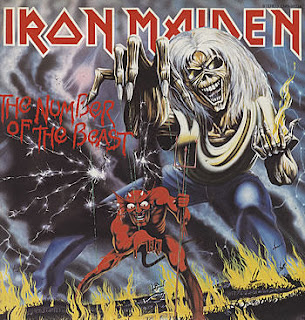 There's no question that Iron Maiden's 1982 album "Number of the Beast" stands as one of the greatest heavy metal records of all time. It's a great record from start to finish and produced the band's signature tune, "Run to the Hills." But there are two much more powerful songs, both slower numbers, on the record that often get overshadowed by that song, "Children of the Damned" and my personal favorite, "Hallowed Be Thy Name."

In my opinion, this is a perfect metal song. It's got all the elements for greatness. It opens with this dark, moody lick with the doom bell tolling in the background. The combination of Dave Murray and Adrian Smith's guitars and Steve Harris' bass harmonics sounding a bit like bells themselves. Then come the powerhouse vocals of Bruce Dickinson, still one of the best in the business, but toned down, low and dark, as he takes on the role of a condemned man waiting for his trip to the gallows. You can almost visualize the sands running through the hourglass. Then Dickinson hits that long note on "running looooow," that everyone else runs out of breath trying to sing along with, leading into the heavier parts of the song.

Here, Murray and Smith take over the show with their trademark dual guitar harmonies belting out licks that you can't ignore and can't get out of your head. Harris, too, tones down his usual lightning bass rumble to a slower gallop that adds weight to the song. Dickinson's voice is meanwhile going through all the emotions you'd expect of someone awaiting death -- sorrow, then anger and finally a reluctant acceptance of his place. Finally, you get the aggressive ending of the tune where the tempo picks up, guitar solos blaze and Dickinson unleashes some air raid siren-worthy notes as, the listener assumes, the execution time has arrived. And don't forget those final drum strikes, like the kicking legs of the hanged man.

"Run to the Hills" and the title track may get more airplay, but "Hallowed Be Thy Name" is the true masterpiece of Iron Maiden's masterwork.

Hear a sample of "Hallowed Be Thy Name."

Get "Number of the Beast."

Stuck in my Head is an occasional feature about whatever song happens to be running around incessantly in my head at the moment.
Posted by Fred Phillips at 12:06 AM